MemTest is a portable program for Microsoft Windows devices that you can use to test the installed RAM (memory) for errors and issues.

It's a good idea to check a computer system's components when you start it up for the first time after you have bought or assembled it.

It does not really matter if you have assembled the computer yourself, or purchased a computer from manufacturers like Dell, HP or Acer.

It's always a good idea to check if everything is working as intended, as you will avoid issues that may only come to light at a later point in time.

And once you have started to install software, and moved your personal files over, you may not like the idea of having to ship the computer back to the manufacturer or retailer because of faulty hardware too much.

Plus, if you take too long, you may run into troubles replacing the system or memory. Testing may also come in handy if you notice issues like crashes while using the computer. 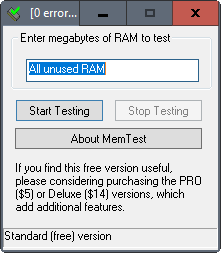 MemTest is a free memory testing program for Microsoft Windows devices that can check the installed memory for errors.

MemTest 5 has been released. The new version of the program is 30% faster than version 4.x, the last version. Since we have only covered MemTest 4.1 here previously, lets take a quick look at other improvements:

The most recent version is MemTest 4.1 which ships with improved support for Windows 7 and Windows 8. A Pro version of MemTest is available that has been created for the needs of users who diagnose memory often.

It costs $5 and ships with several improvements including command line support, error logging to disk, additional error details, no pausing when errors are found and a "nice mode" which allows you to test RAM in the background so that the system can be used just like any other computer.

MemTest 3.4 tests your systems memory to make sure it is not damaged. It's also a great way to test it when you overclock your computer / ram. This way you can make sure that it's still reliable and does not produce errors.

The latest version of MemTest is 4.0 which you can download from the developer's website linked above. Version 4.0 comes with bootable CD support and support for 32-bit and 64-bit processors.

An alternative is Memtest86 which you can download from this page. The latest version of the application comes as a desktop and server version. The desktop version supports up to 64 Gigabytes of memory, and speeds up the testing with its 16-core multi-threaded support. The server version tops it all off with support for up to 8 Terabytes of RAM, and 32-core support. An ISO image for Windows and Linux is provided, as are floppy disk packages for Windows, an USB key image for Linux, and source and binary packages for the Linux operating system.