Muzip is a freeware packer that supports formats like zip, gzip and tar. It's only 460K in size and offers an explorer like interface. It also offers the possibility to backup files on your hard drive and even schedule the backup using the Windows Scheduler.

A unique feature is the manual rebuild functionality which lets you make all the changes you need to do to an archive before the archive itself is rebuild. If you are looking for a Winzip alternative try Muzip.

Update: Muzip has not been updated since 2008, which has a few consequences. It is first not clear if it is still working under newer versions of Windows, or if it will support future versions of the operating system. Even if that is the case, for both 32-bit and 64-bit editions, it still means that it is kinda outdated. This may mean that bugs that occur won't be fixed anymore for instance. 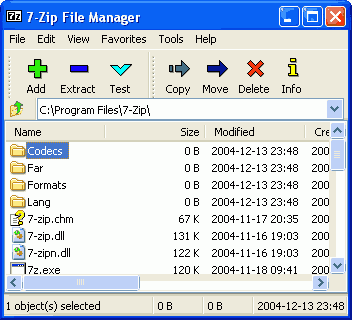 It is therefor recommended to switch to a different program like 7-Zip. This has several advantages. It first ensures that you get a packer that is updated regularly with new features, improvements and fixes. When you compare 7-Zip with Muzip, you will also notice that the former supports more formats than the latter. Where the former only supported zip, gzip, tar and uue, 7Zip supports a variety of additional formats, including the popular RAR, 7Z and ISO formats that you can unpack using the open source tool.

7-Zip offers additional features, like integration with windows shell, a very high compression rate, or a file manager that lets you handle all the unpacking and packing from its user interface. The software is provided as a 32-bit and 64-bit file for all recent versions of the Windows operating system.