I sometimes run into space issues on my desktop, when the number of windows that I want to display on the screen at the same time are too large to fit on it so that some information cannot be accessed without window swapping. This happens for instance when I use SSH to work on my rootserver and use a browser to find information.

Vitrite is a 85K freeware that lets you change the transparency level of every windows application with ease. Start Vitrite, bring the window in front that you want to make transparent and hit CTRL + a number from 1-9 with 1 being 90% and 9 being 10%.

Update: Initially designed for Windows XP and Windows Vista, Vitrite has been updated to also be compatible with newer versions of the Windows operating system, including Windows 7. The project homepage has changed as well, and we have replaced the original site link with the new homepage project page. 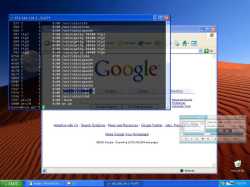 Vitrite is automatically minimized in the system tray when you start it up on a supported system. The basic method of making windows transparent has not changed. You can still use the Ctrl-Shift and a number of 1-9 shortcut to change the active's window transparency level to a value of 10% to 90%.

These transparency settings are remembered by the software, so that they stay active even if you switch windows and such.

Vitrite has a second feature that may be interesting to some users. You can use the Ctrl-Shift and + shortcut to set a window to be on top of all others. The always on top feature can be pretty useful in combination with the transparency feature so that it is possible to view through that window to see what's behind.

The program is offered as a portable version and an installer. Developers may also find it interesting that the author of the software has made the source code of the application available.