We all need a break from our daily routine, and many PC users like that break to be in the form of a game. This is where most people say Linux doesn't have any games. Au contraire mon ami. Linux does have games. Not your modern full-on 3D games that require more computing power than your average Beowulf cluster, but it does have a large amount of solid games that can serve to get your game-break on.

So now and then I am going to add to ghacks an article about a fun Linux game that you can install and enjoy quickly. I will try to cover all types of genres of games. And remember - these games won't stand up to the graphics of many of the games you will find on retail shelves as these games will be open source games that are created by users just like you.

This first game I discovered while scrolling through Synaptic on my Debian-based system. 20,000 is a steam-punk themed strategy game where you have to manage a steam system to power a city. During this game you will build steam plants that power your city via steam pipes. As the game progresses you will have to over come natural disasters and aliens that do everything they can to take down your pipes and plants.

The game is played in 2d from the top down and offers very simplistic game play in either full screen or windowed mode.

If you use Ubuntu you are in luck: Just open up Synaptic, do a search for "lightyears", select the results, and click apply. You can also issue the command sudo apt-get install lightyears to install. If you use Fedora you can follow these directions:

If you install on Ubuntu you will find the game in your Games directory or you can issue the command lightyears from the command line. 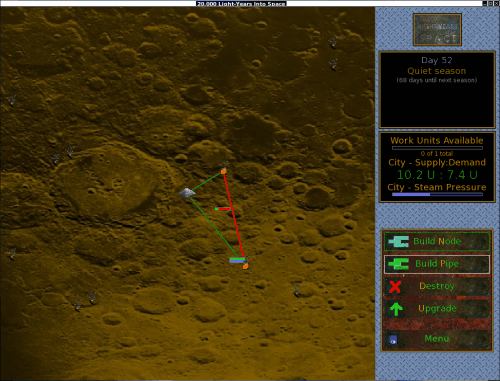 The main window is where all of the game play takes place. As you can see (in Figure 1) you are on the surface of another planet and your task is to supply your city with steam. Around the surface of the planet are steam pockets that you have to build nodes on in order to pump steam into the city. So you build nodes and then pipes to get the steam to the city.

If only it were that easy. The game depends heavily on the efficiency of the nodes' and pipes' ability to get enough steam to the city. So you have to upgrade nodes and pipes, place nodes strategically so longer pipe runs, when destroyed by aliens or earthquakes, will not completely deplete your city steam pressure.

Games tend to be fairly short lived. My max game so far has been around twenty minutes. This is mostly due to the nature of the game - having to make sure you are as effient as you can be in creating enough steam to get to the city.

Although Lightyears seems very simplistic it will challenge you and keep you interesed in the way many of the tower wars games have done.