The extras include more than 3400 images including clip arts and photos, more than 90 fonts, templates and sample documents, VBA support, better PDF support and lots more.

The Office suite has a size of about 200 to 250 Megabytes depending on the operating system that you have.

The most important feature in my opinion is support for Microsoft's Open XML format (docx for instance). This means documents created with Microsoft Office 2007 and saved as docx can be read by Oxygen Office Professional. 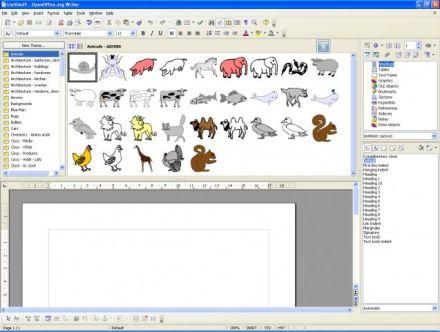 I'm however generally not that fond of software suites that ship with lots of extras that I never ever use. Those tend to waste space on my hard drives for no reason at all. Still, if you need one of the features of Oxygen Office you might want to give this a try, especially if you like to use clipart, need extra fonts or more templates.

Update: Oxygen Office Professional is still regularly updated and while it seems to lack a bit behind in terms of version number, the latest version of it currently is 3.2.1 while the latest Open Office version is 3.4.1, it may still be interesting for users who want to use additional features it makes available.

Open Office supports Microsoft's XML format as well now so that you are left with other features including the clipart and template pack it ships with. The site of the suite has increased and is now sitting at about 300 to 350 Megabytes on average.

I suggest you check out the Sourceforge hosting page if you are interested in finding out more about the program.

The application was last updated a year ago (as of May 2014) which may mean that the project is not progressing as fast anymore as it once was. This becomes obvious when you compare it to recent OpenOffice releases which are still being published regularly.

The program should work fine though on most versions of Windows. The only issue is that it does not ship with the most recent version of OpenOffice anymore.