The Man Command in GNU/Linux

One of the things that terrifies most people about GNU/Linux is the command line. Granted, most users can get away with never touching a terminal window nowadays on most modern distributions, but when a lot of people think of GNU/Linux they instantly picture a command line interface of scrolling text and gibberish code.

Thankfully, learning to actually use the command line is not quite as daunting as one might assume, especially with the help of something known as the Man Pages.

Have you ever heard of the acronym, “RTFM,” or “Read the freakin’ manual?” It’s commonly thrown around by GNU/Linux power users who don’t feel like helping a new user out with simple questions. Often when they refer to ‘the manual,’ they are referring to the Man Pages.

But what ARE the Man Pages? 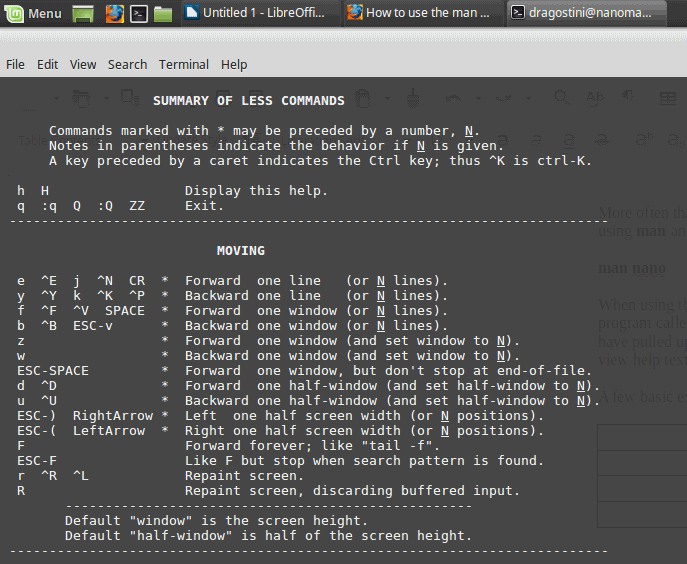 How to use the man command

The syntax of the man command is very straightforward and easy to learn to use:

More often than not people will not even use options when they use the man command, simply just using man and then the keyword only.

When using the man command, more often than not the output is automatically pushed through a program called "Less", which allows you to view the output one page at a time in fullscreen. Once you have pulled up the man page for the program or application you are looking into, you can press "H" to view help text which will give you a list of hotkeys to press to navigate through "Less."

Some examples taken directly from the help page of Less are:

The Man Pages are an absolutely invaluable asset as stated before, for learning how to use a text only interface in the GNU/Linux world. If ever you are wanting to learn more, or finding trouble with running programs and applications, alway

Article Name
The Man Command in GNU/Linux
Description
Mike walks you through the steps of making use of the man (manual) command on GNU/Linux machines when running commands from the Terminal.
Author
Mike Turcotte
Publisher
Ghacks Technology News
Logo

Mike graduated Conestoga College's final-ever year of Journalism - Print, is a writer for an analytics company by day; and a Linux lover, gamer, and virtual-reality aficionado by night.
View all posts by Mike Turcotte-McCusker →
Previous Post: « A Brief look at sudo for beginners in Linux
Next Post: A look at OpenSUSE based Gecko Linux »