A look at I-Nex - a CPU-Z like Application for GNU/Linux - gHacks Tech News
ghacks.net

When I was running Windows one of the first pieces of software I'd install after I'd grabbed all my necessities, was CPU-Z.

It was useful for looking at temperatures, specs, generating reports, and just overall gathering of information. In GNU/Linux we can do all of this via the terminal, but not everyone likes to use consoles, and some may not even know how to. Thankfully, I-Nex exists, and it serves many of the same purposes.

Installing I-Nex can be easily done on numerous distributions. For a list of distros and their install procedures, visit http://i-nex.linux.pl/install/

Once installed, pop it open and take a look! Windows users may notice that the interface of I-Nex resembles that of CPU-Z. 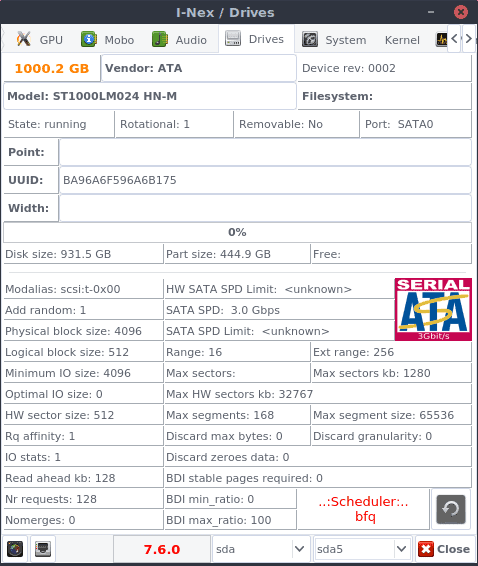 I-Nex has multiple tabs of information, for just about everything you can think of. On the CPU tab it showed information such as the CPU model, temperature, speed, family, cores, address sizes, flags and capabilities, turbo clock speed for those of you with Intel processors that support it, Cache sizes....The list goes on and on.

I was actually quite surprised to see the mass amount of information in my audio tab. Not only did it list the devices, codecs and drives, but it gave me an entire output all about hardware as well in a compact scrollbox. Practically everything I could have ever wanted to know (and more than I understood) was there available for my perusal, something I actually quite enjoyed having.

There are MANY other tabs to look at as well, such as:

Each of these giving practically all the information one could ever need about their system.

However, two especially handy tools at the bottom of the GUI were also noticeable to me, that I feel make absolutely GREAT additions; the ability to take a screenshot from within I-Nex itself, and to generate a report, which any software like this should (and usually do) incorporate, at least on the report side of things.

I think that while albeit the addition of taking a screenshot is perhaps slightly redundant as most GNU/Linux distributions have a screenshot utility installed by default, I guess it's still a good idea for those who do not. There have been numerous instances where a screenshot of specific specs has been required of me over the years, so I can see its usefulness.

There were however a couple of small things I noticed right off the bat that did not function entirely with I-Nex, and they were information about my Hard Disk. I-Nex was unable to tell me how much of my Hard Disk space was free, and I noticed that there was a SATA Speed section, but not a disc speed (I know this disc is 5400RPM) as well as the filesystem information was also missing. Perhaps there are ways to fix that, but thankfully the rest of the information was visible.

All in all, if you're someone who would find a tool like this useful, or has on Windows and was looking for something similar for GNU/Linux, I-Nex is a great alternative!

Mike graduated Conestoga College's final-ever year of Journalism - Print, is a writer for an analytics company by day; and a Linux lover, gamer, and virtual-reality aficionado by night.
View all posts by Mike Turcotte-McCusker →
Previous Post: « A look at the nano text editor in GNU/Linux
Next Post: Canonical Looking for user input on software selection for Ubuntu »