Firewall App Blocker 1.5 is the latest version of the popular third-party program for Windows to block applications from accessing the Internet.

While you can block any process from connecting to the Internet using the built-in firewall on Windows machines, the process is not overly comfortable as it involves several steps to complete.

That's one of the main reasons why programs such as Windows Firewall Control and Firewall App Blocker are popular. 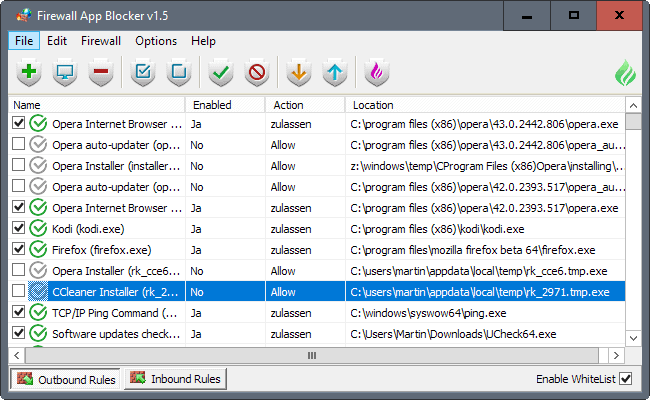 Firewall App Blocker was designed to improve the process of allowing or blocking applications in Windows Firewall. The portable program extends Windows Firewall in this regard.

To use it, download the latest version of the firewall program from the developer website (linked in the summary box below this article), and extract the archive that it is provided in.

The program is provided as a 32-bit and 64-bit application in the program folder after extraction. The 64-bit version of the application is a new feature of this release.

If you have used the last version of the program, released in 2014, you may notice differences immediately.

The outbound and inbound rules are now separated, so that it is easier to keep an overview.

All existing rules are listed in the interface. Each entry is listed with its name (usually program name and filename), the location on the disk, whether the rule is enabled, and the action (allow, block).

You can sort the data with a click on a column header, for instance to display all active rules, or all rules that block connections.

Add process is another new feature of Firewall App Blocker 1.5. You had to select programs on the disk in previous versions to add rules for them. With the new add process option, it is now possible to pick running processes as well which makes it easier as you don't have to browse the system for the file location anymore.

Instead of selecting each executable file individually, you'd simply block the whole folder using the program. How that is done? Simple: click on File > Add Folder Contents, and select the folder using the file browser that opens. 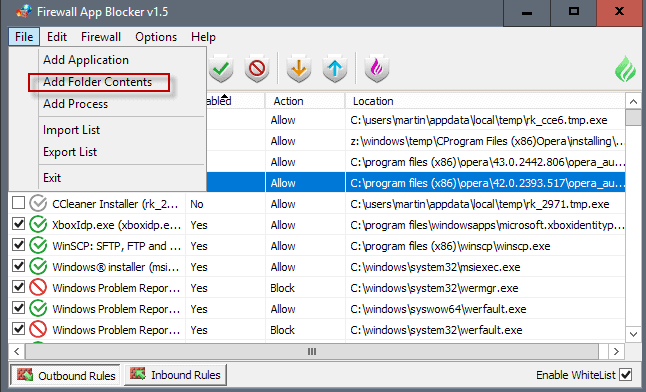 Firewall App Blocker supports a new and handy "block all Internet" feature which you can toggle with a click on Firewall > Block Internet. You may use the same Firewall menu to disable the firewall as well.

What else? The program window is resizable now, and you may change the font used by the application to display the firewall rules in the list.

Last but not least, there is a new whitelist mode feature which blocks all processes from connecting to the Internet except for those on the whitelist. You switch between default mode and whitelist mode in the firewall menu.

Now You: Which firewall, and program, do you use on your machines?