Fast Methods to shut down Windows

Most Windows users shut down the computer through the Windows Start Menu, probably. Probably, because statistical information is not available that would prove it.

While shutting down Windows through the Start Menu works, it is not the fastest option that you have at your disposal to shut down the operating system.

Most methods should work in all versions of Windows. The supported operating systems are listed if that is not the case. 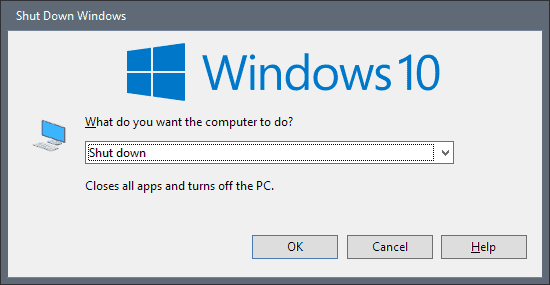 Using Alt-F4 may not be the fastest method to shut down a PC running Windows, but it works in all versions of the operating system.

All you need to do is use the shortcut Alt-F4 while the desktop is active, and click ok when the Shut Down Windows prompt opens.

It is not the fastest option, as you need to click on the desktop first to make sure it is active, before you hit the shortcut.

You may hit Alt-F4 multiple times, as it will close any open program window when you do. You will reach the desktop eventually and trigger the shut down prompt.

Tip: you may use Windows-D to minimize all program Windows, then use Alt-F4 to bring up the menu.

This option is only available on Windows 8 and newer versions of Windows. Use the shortcut Windows-X to open the menu, then press U, and U again.

The first U selects the Shut down or sign out menu, the second the Shut down command of the menu once you have selected it. While you may use the mouse for that as well, using the keyboard is usually a lot faster.

We have established already that you can shut down Windows using the Start Menu. While most users may use the mouse for that, you may use the keyboard exclusively as well.

Press the Windows-key, then the right-arrow key on the keyboard, and finally the Enter-key. This selects shut down from the power menu under Start, and shuts down the computer. 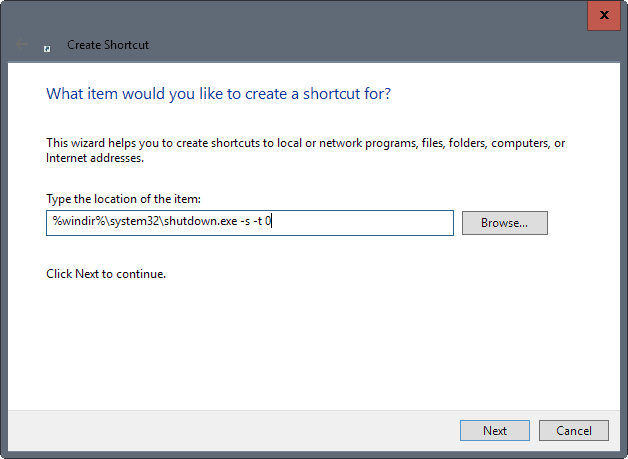 It is usually not that comfortable to type the command. What you can do is create a shortcut, and place it on your desktop so that you only have to click on it to shut down Windows.

Tip: You can assign a keyboard shortcut to the shortcut to run the command from any location on the system. Right-click the shortcut on the desktop and select properties from the context menu. Locate the Shortcut Field, click on it and pick a shortcut for it that you want to use, for instance Ctrl-F11 or any other shortcut that you are comfortable with and is not mapped by Windows or programs already.

Superfast Shutdown is a free program for Windows that does one thing when you run it: it shuts down the computer quickly.

You can read our review of Superfast Shutdown, and also download it directly from the review page as the developer website is no longer available.

Initially designed for Windows XP and Vista, it is compatible with all recent versions of Windows as well.

There are other methods to shut down Windows quickly, but they are usually slower than the ones mentioned. You can use the PowerShell command Stop-Computer for instance, or press Windows-L to lock the computer, and select shut down from the lockscreen afterwards

Now You: How do you shut down Windows?

Previous Post: « Windows 10 Cloud brings Windows RT back from the dead, sort of
Next Post: Windows 10 Insider Build 15025 is all about bugs and fixes »