Microsoft has begun to move desktop themes for Windows 10 to the Windows Store. The company announced some time ago that it would make available themes in the Store, and the move marks the first step in that direction.

Windows Store features apps and game downloads, Edge extensions, and also music, movies & TV content right now. Microsoft wants this to be the one-stop shop for all things Windows. One thing that you may never see in the Store however are legacy Windows programs.

Windows 7 and newer versions of the Windows operating system support two types of themes. Full themes that may change any button, icon, font, color and more on the system, and light themes that change wallpapers, some colors, sounds and the screen saver. 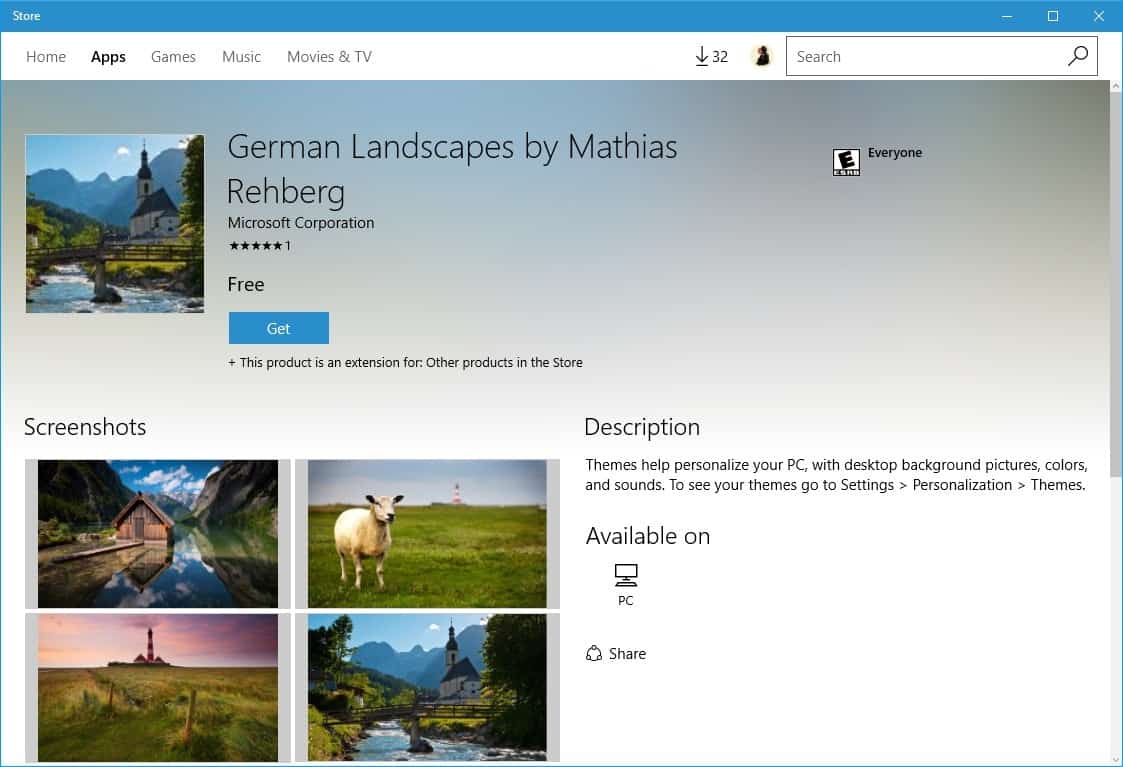 The first set of light themes are now available in Windows Store.

The store pages open just fine when you click on the link, and the get operation to download the theme to the local system works as well. The launch operation however is not functional yet which means that you can't just go ahead and switch to the theme easily right now.

It appears that Microsoft will add the missing functionality somewhere between now and the release of the Creators Update release candidate.

The themes are downloaded to c:\program files\windowsapps\[themename]. You find the .theme file under theme in the folder that is created when the Windows Store download completes.

Please note that users don't have access to the windowsapps folder by default. This means that you need to add the user account that you are using to the list of accounts allowed to access the folder (via the Security tab). The theme installs fine then when you double-click on it.

All themes add mostly images and nothing more to the operating system. While some users may like this, it is not anything special considering that you can create your own Windows themes as well using custom images.

Some users may like the new functionality and Microsoft will surely push more themes to Windows Store prior to the release of the Creators Update for the operating system. You should not expect anything more than wallpaper bundles though with a custom color or two thrown in to the mix though. (via MSPU)

Now You: Do you use a custom theme?

Article Name
Windows Store: now with desktop themes
Description
Microsoft has begun to move desktop themes for Windows 10 to the Windows Store from where users can download and install them on their PC.
Author
Martin Brinkmann
Publisher
Ghacks Technology News
Logo

Martin Brinkmann is a journalist from Germany who founded Ghacks Technology News Back in 2005. He is passionate about all things tech and knows the Internet and computers like the back of his hand. You can follow Martin on Facebook or Twitter
View all posts by Martin Brinkmann →
Previous Post: « Fix Windows Update errors with new Windows 10 repair tool
Next Post: RansomFree: protect your PC against ransomware »