Reddit announced a week ago that it decided to start tracking outbound links on the site which effectively means that they know on which outbound links Reddit users clicked.

According to Reddit, doing so will open up new possibilities for the site, for instance to better combat spam or better stats such as clicks to votes.

You can verify the tracking using the Developer Tools of your web browser. While on Reddit hit F12 to open the developer tools, and use the inspector tool to select an outbound link on the Reddit page you are own.

You should see the attributes data-href-url and data-outbound-url associated with the link.

Update: Reddit turned the feature off for the time being until they add privacy controls that let users control it on the site directly. 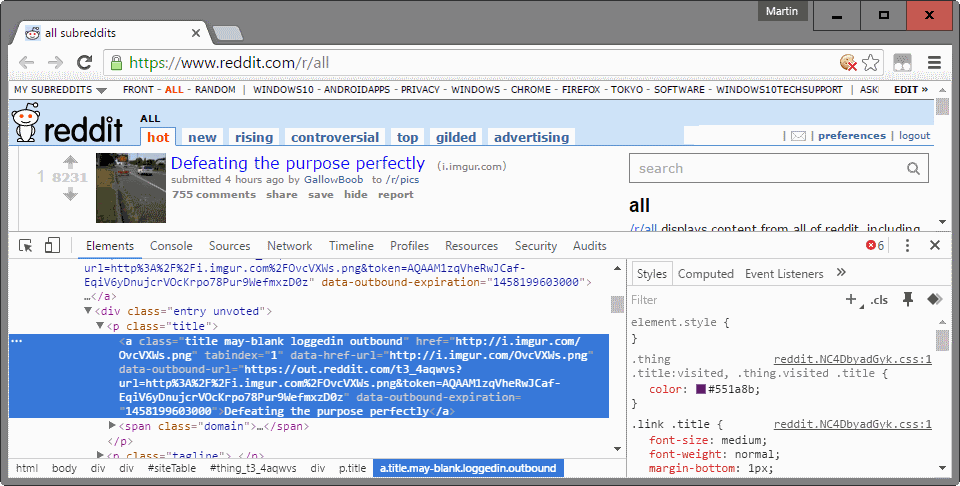 The attributes have the following values:

If you don't want to be tracked on Reddit, you have two options to deal with the issue. First, instead of left or middle-clicking on a link, right-click on it and select to copy it instead. Open a new browser tab and load the link this way.

While this may work for light use, it is not overly comfortable if you open links regularly on the site.

A Reddit user has created a userscript that you can add to your browser instead. Chrome users need to install Tampermonkey and Firefox users Greasemonkey first before they can make use of it.

Here is the script:

Adding it to Tampermonkey

Adding it to Greasemonkey

Greasemonkey is supported as well. To add the script to the extension, do the following:

The result is the same: The data tracking attribute is replaced by the original link so that Reddit cannot track the click anymore. 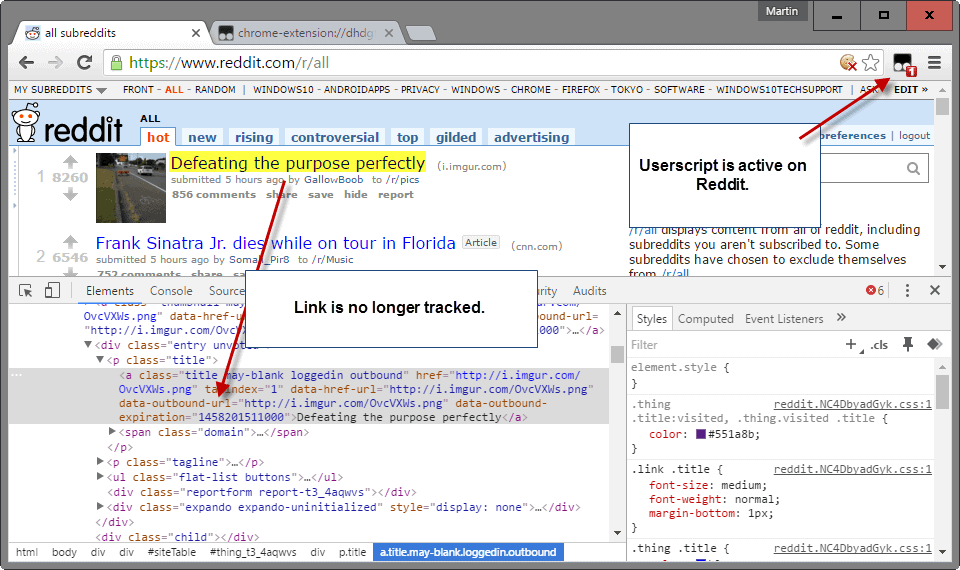 It is unclear right now whether Reddit will implement an option to opt-out of the outbound link tracking on the site in the future. It seems likely however that third-party extensions such as RES will add the functionality eventually.

Martin Brinkmann is a journalist from Germany who founded Ghacks Technology News Back in 2005. He is passionate about all things tech and knows the Internet and computers like the back of his hand. You can follow Martin on Facebook or Twitter
View all posts by Martin Brinkmann →
Previous Post: « Firefox and Chrome ship with experimental WebAssembly support
Next Post: Binary Newsreader SABnzbd 1.0 released »