KMPlayer is a popular media player for desktop systems. In fact, it is one of the most popular players next to VLC Media Player, SMPlayer, and a couple of others.

One core reason for the player's popularity is the built-in support for many media formats. That's great as you do not have to install codecs on the system to play the supported formats.

KMPlayer for mobile devices launched a couple of days ago. It is available for Google Android and Apple iOS devices, and can be downloaded for free from the official web stores. You find the links on the official KMPlayer website.

This review looks at the Android version of KMPlayer exclusively.

The first thing that you notice when you open the product page on Google Play is that the app is only compatible with Android 4.0 or newer devices., the second that only video formats are listed in the supported file formats listing.

And when you try to run music or audio using the player, you will notice that it does not support that right now. That's quite a downer for desktop users who expect similar support on the Android device.

For now, you can only use it to play videos on Android. Support here is excellent though as all major formats and codecs appear to be supported by the app.

When you first start the application it displays the all media listing to you. You can tap on the settings icon in the top left to display the menu, or on all media to browse to different media folders here. 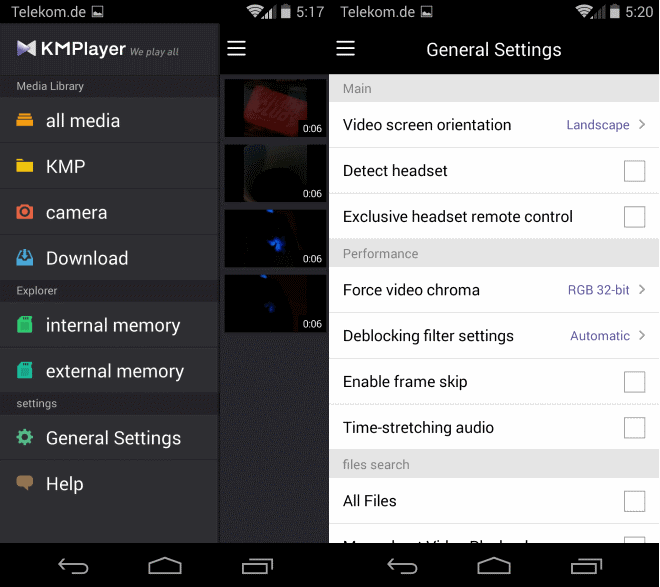 The menu displays access to the device's media library. Listed here are links to all media, a KMP folder, the camera folder, and the device's download folder.

Below that are links to the device's internal and external memory that you can browse to load videos that are not located in the four media library folders.

Last but not least it links to the settings which offer several interesting options.

As far as the settings are concerned, you can change the desired video orientation, make the app detect a connected headset or headset remote control, modify performance related settings such as enabling frame skip or time-stretched audio, define search parameters, or the subtitle text encoding format.

The player interface itself is hidden by default when you play a video. You need to tap on the screen once to display it. Here you have the usual controls at the bottom of the screen, including a pause button, slider to change the play position, a button to fit the video vertically or horizontally, a fast or slow play option, and a setting to lock the screen. 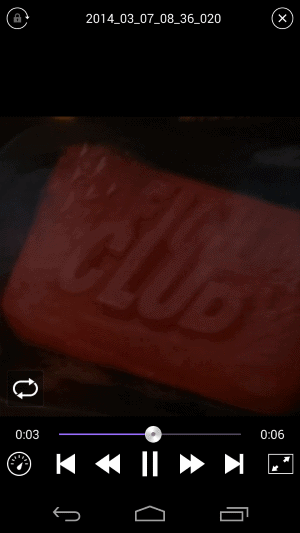 You can drag a finger to the right or left to go back or forward, or up and down to change the brightness or volume (lower half of the screen volume, upper half brightness) so that it is possible to change those parameters directly.

KMPlayer looks great and plays nearly every video format that you could possibly stumble upon on the Internet or on your device. The lack of music playback however is something that will hold the player back for now, as it is not the universal media player that you may know from the desktop because of that.

You may want to give this a try if you want to use it to play videos on your Android device.  If you want a player that supports audio formats as well, then this player is not for you right now.

Martin Brinkmann is a journalist from Germany who founded Ghacks Technology News Back in 2005. He is passionate about all things tech and knows the Internet and computers like the back of his hand. You can follow Martin on Facebook or Twitter
View all posts by Martin Brinkmann →
Previous Post: « WordLookup displays word definitions on Android
Next Post: LastPass Premium for Android gets auto log-in feature for apps »