How To Recover Deleted Hotmail Emails

Microsoft has implemented two fail safe mechanisms when it comes to deleting emails in Hotmail. Emails that you delete in Microsoft's email service are first moved to the deleted folder. This is similar to the way files are deleted in Windows. The idea here is to give you an option to recover emails that you may have accidentally deleted, or emails that you have deleted but need to access at a later point in time again.

A click on deleted in the sidebar displays all email messages that you have deleted in Hotmail and not yet removed from that folder.

Emails that you delete in Hotmail's deleted folder are not necessarily deleted permanently. This may come as a surprise to Hotmail users who thought that deleted emails would as a result be unrecoverable.

When you look at the bottom of the screen, you will notice the following message there:

Lost a message? When you recover deleted messages, we bring back as many as we can. Learn More.

The recover deleted messages sends a command to Hotmail to recover as many deleted emails as possible. While you do not get a guarantee that emails can be recovered, it can mean that you or someone else can recover emails that you thought were deleted permanently. As with all things tech, this can be used for good and bad purposes.

Microsoft does not reveal much about the process. The company fails to state the criteria (e.g. time, space or other constraints) that it uses to recover previously deleted emails.

The help page notes that the deleted folder gets cleaned up regularly, and that the option has been primarily been designed to give users an option to recover emails after hacking attacks (as hackers may delete all messages of an account).

There is however an option to stop Hotmail from offering to recover deleted messages. Click on the Options link in the upper right corner of the screen, and selected More Options from the context menu. 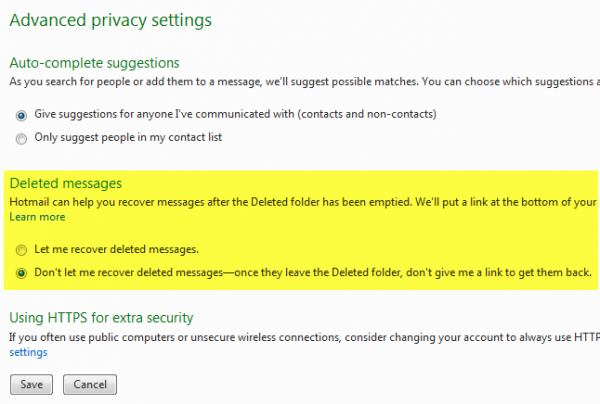 Click the Save button in the end to save the new preference. Emails that you delete in the deleted folder from that moment on, can't be recovered anymore.

These phishing email subjects get the most clicks