Do You Love the Windows 8 Consumer Preview or Hate it?

Whatever Microsoft may be saying about how great the Windows 8 Consumer Preview is, there can be little doubt that it's provoking some very strong reactions.Â  People are either loving or hating the new OS with very few people sitting somewhere in-between.Â  I thought then I'd share my own thoughts with you and ask the question to you directly.Â  Do you love or hate Windows 8, how do you feel about it?

Personally those people who know me will know that until now I've been far from the biggest fan but slowly the operating system is winning me over.Â  It is doing this firstly because I'm looking past the new Metro user interface at the other new and sometimes very cool features in the OS, and also because I'm figuring out how to get that Metro UI to work for me, the way I want it to.

So what are these new features that are winning me over?Â  To start with the new ways that Windows handles file management.Â  The new copy and move feature finally handles these operations in a sensible and common-sense way, even offering a pause control so that long jobs can be continued the next day or after you have been out for a while.Â  This small feature is very minor however, especially given that third-party utilities such as TeraCopy have offered this functionality for years. 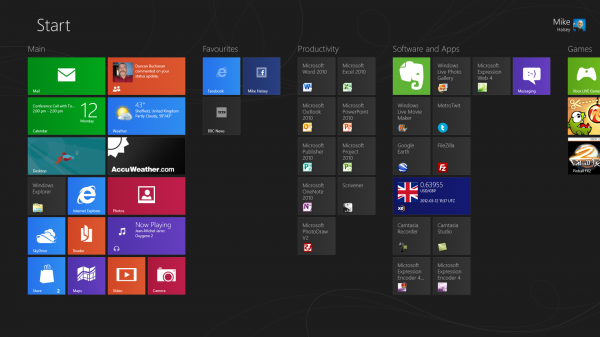 Additionally the inclusion of Microsoft's type-0 Hyper-V hypervisor and other technologies such as Windows To Go I can personally see being very helpful.Â  As the author of Troubleshooting Windows 7 Inside Out and someone who regularly received much help and support email from readers, the inclusion of anti-virus after so many years is a welcome relief.Â  It's not all so good however asÂ the storage aggregate, Storage Spaces would have been much more helpful six years ago in Windows Vista when hard disks were still relatively small and tower PCs were still the order of the day.Â  This feature is much less useful now that we commonly see 3Tb hard disks in all-in-one machines that can only accommodate a single hard disk anyway.

Other ways that the operating system falls down are that while I whole-heartedly welcome the removal of the Start Menu, which was completely unnecessary after the Windows 7 Taskbar was introduced.Â  There is no auto "pin to Taskbar" option for new software and no otpion for "software buckets" to hold program options in the same way Start Menu folders do.Â  This seems very short sighted and was something I was calling for three years ago when Windows 7 was first unveiled.

Regards the new Start Screen itself I mentioned that I have found a way to use it that suits me.Â  I am pretty much using the new Start Screen as a sub-desktop of live widgets along the lines of the OS X Dashboard.Â  I still don't like the shut down and restart options being moved, and really quite hidden, in the Settings for the computer and other things are fiddly or annoying too.

Windows 7 was never a perfect operating system though either, neither was Vista, nor XP (no matter what some people might tell you).Â  In fact no operating system is ever perfect and we have to find was to use it that best suit us.Â  With this in mind all you can really do is find a way to get an OS to work for you, which is what I did with Windows 8.Â  After doing this I was able to think more about what lay under the surface, and now I'm really warming to it.

That's just my opinion though and I'm not going to make excuses for where Windows 8 is failing to impress people, or where mistakes are genuinely being made.Â  So what do you think, do you love Windows 8 or do you hate it?