The British Broadcasting Corporation (BBC) has for many years now had one of the biggest and most visited websites on the whole Internet.Â  The company has taken great pride over the years and in 2002 a leaked document, still available onlineÂ called "The Glass Wall" provided a masterclass in website usability that many people still consider an invaluable document today.Â  Now though the broadcaster is taking things to the next level with what can only be described as a properly touch-friendly website.

The new beta site can be found at http://beta.bbc.co.ukÂ and displays an almost metro'esque sliding panel system with more traditional links in the bottom half of the page.Â  The whole web needs to move inexorably towards full and complete touch-friendliness in short order.Â  The amount of people using Tablets to navigate the web is already growing exponentially, and the forthcoming Windows 8 with it's touch-centric interface will mean that by the end of 2012 touch-screens will be the norm on new PCs and laptops.

I myself am currently revamping my own website to make it completely touch-friendly and will be relaunching the new design within a week or two.Â  It's noticeable however that the major players, including Amazon, eBay and YouTube haven't yet caught on to the fact that traditional drop down menus, text links and crowded lists simply can't be used effectively with touch. 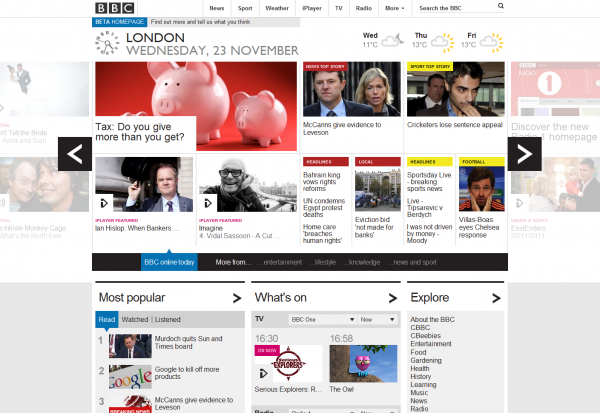 This does raise interesting questions as to whether website UI components that we've come to know and love such as dynamic drop down menus and text lists can survive the transition to touch at all.Â  Any touch website has to be cross-compatible with every touch device, and many will work in their own unique way.Â  When it comes to touch on computers a proper standard is yet to emerge, if it ever will, about how swipe and touch gestures are interpreted.

The BBC haven't got everything right when it comes to touch, but this is still a beta and with a website as utterly enormous as this, withÂ literally terabytesÂ of video, educational and article content sitting underneath it would be extremely difficult to create an interface simple enough and that included everything.

In part this is the biggest challenge that the touch web, and touch-screen apps as well, has to overcome.Â  For things to be truly finger-friendly you have to limit what is available and make clever use of screen real-estate, this is a challenge I had to content with as I too have ever growing libraries of video and other content on my own website.Â  For a small site like my own it's easy to juggle things around, for the BBC and other major corporations however the challenge might simply be too big.

The new design is lovely, I think anyway and a radical departure from the current BBC homepage with it's customisable and arrangeable tiles (circa Yahoo from some years ago).Â  The design will no doubt change slightly, indeed I have noticed changes being implemented within the last 24 hours.Â  It is great though to see this website, deliberately or otherwise being made finger-friendly.Â  Pressure now needs to be brought on the other major website owners to do the same, and do it quickly.Â  It is entirely possible however they they won't even consider this until their visitor numbers begin to drop, and by then it might well be too late for them.

Previous Post: « News360 Periscope, Related News On Popular Online News Sites
Next Post: « What Is Bittorrent DNA, Remote, And Should You Use It