Have you ever wanted a laser printer at home, or even a wireless laser printer, but not had the money to be able to afford one?Â  Well things have changed radically in recent years.Â  When I bought my first last printer in 2003 it cost me Â£400 (around $550) for a basic colour model.Â  It was huge as well.Â  Now I have a colour multi-function device that's just cost Â£180 which is an absolutely bargain.

This printer too though is pretty huge and not something you'd be at all comfortable having in your living room.Â  It's limited too, requiring a USB or wired network connection.Â  What was really needed then was a smaller, better option.

Fortunate then that Samsung, along with various other pieces of review kit, sent me their new ML-1865W Mono Laser last week to test.Â  Now I was expecting a big, bulky and franky ugly printer to arrive.Â  Imagine my surprise then when a small sleek black box arrived, measuring only 341 x 224 x 184 mm.

This printer is undeniably two things, dinky and lovely.Â  It's no bigger than a typical inkjet printer when closed up, and the high-quality piano black plastic body means it wouldn't look bad in anybody's home office or living room.

I was keen then to see if a laser printer this small could actually perform.Â  The first test was in connecting it wirelessly to my network.Â  The printer can be attached directly to a computer via USB, but can also connect via WiFi to your home orÂ small-officeÂ network.Â  It does this though the pressing of only two buttons, one on the printer and one on your router (both called WPS).Â  This would, theoretically, pair the devices almost instantly. 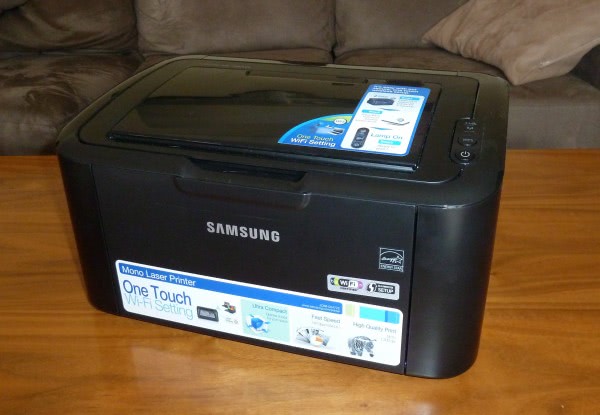 Suffice to say I was slightly sceptical at this claim, but the printer connected effortlessly to my TalkTalk home router and was ready and available on the network in around ten seconds.Â  Eager to make sure this wasn't a fluke, I took the printer to a neighbour where their BT Home Hub flatly refused to acknowledge the printer's existence.Â  This I don't think is a fault with the printer itself, as it will be designed to work in a standards-compliant way.Â  It would involve a probably lengthy call to your ISP's technical support however and some tinkering in your router's administration settings to get it working.Â  This might just be too much for some people who might just give up and connect it via USB instead.

The driver install is simple enough, even with the printer connected via WiFi, though this could cause some issues if you are using the printer with Windows XP.Â  Alas I wasn't in a position to be able to test this scenario as all my computers run Windows 7 andÂ I'm notÂ mad enough to put XP back on them! 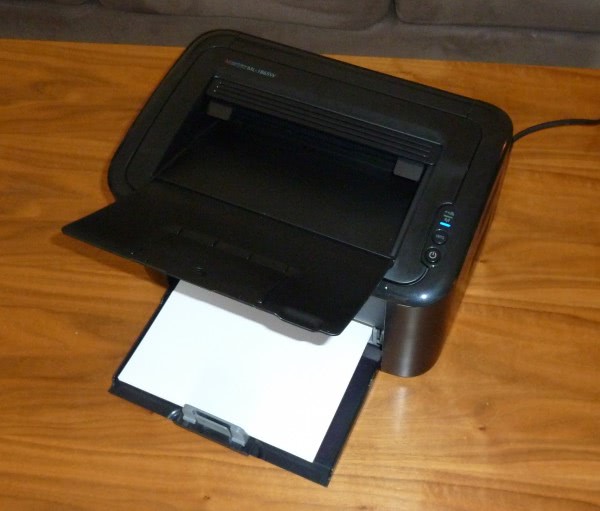 The true test of a printer is in it's speed, noiseÂ and print quality.Â  Samsung claim the ML-1865W has a startup time of 8.5 seconds and then, oddly, don't claim any figure for a page per minute (ppm) speed.Â  I thought this odd and perhaps an indication that the printer would be slow.Â  To test it I threw my Windows 7 Power Users Guide at it, a graphics-heavy PDF running to 170 pages.

True to their word, within 10 seconds the first page began to appear, this first page being the cover with full graphics on it.Â  The printer then speedily churned out the rest of the book at around 20 pages per minute, which is very impressive for a small, low cost machine.

The quality was excellent as well and overall I'm very impressed, it was very quiet too, in fact probably the quietest printer I've ever used.Â  Elsewhere there's a 150 sheet tray and a 100 sheet capacity output tray.Â  The printer will print graphics and text at 1200 x 1200 dpi and connects to your wireless network by 802.11 b, g or n.

Overall then the ML-1865W is a lovely printer to have.Â  It's quiet, quick and attractive with excellent print results and can be bought online for as little as $69.99 in the US and Â£80 in the UK (at least these were the cheapest prices I could find).

The only downfall with this printer is the lack of support with some routers, and it might be a good idea to check with Samsung if your particular router is supported and, if not, with your ISP how easy it is to get it set up in the router's administration interface.Â  This aside though if you're after a monochrome laser for a home or home office, it's a great unit to get and a bargain at just $70.Â  8/10.

You can buy the printer for instance at Amazon for that price: Samsung Electronics ML-1865W Wireless Monochrome Printer