When Working With PDF Printers, Watch The File Sizes

Roman just posted an interesting observation about pdf printers on the Ghacks forum. He noticed that the output file size of pdf printers differed considerably. In his own test, he noticed a difference of nearly 400% between the smallest file size and largest file size. While that's just been a single test, it shows that users may do good to test various pdf printers if file size is a criteria for them.

Roman printed a webpage to pdf document that included text and some images. I decided to investigate the issue further, and came to similar conclusions.

The following pdf printers were used in the test:

You can check out additional pdf printers over at the overview at Freeware Genius's blog. 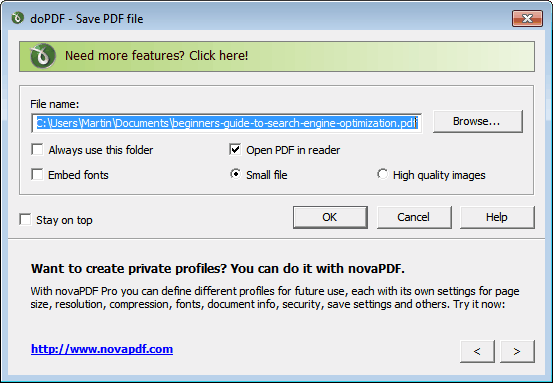 The differences are not nearly as wide in range as Roman's findings, but they may still be considerable. Especially the Word document differences are noteworthy. While Bullzip PDF Printer, DoPDF 7 and PDF Creator remain between 317 and 350 Kilobytes, Primo PDF breaks out resulting in a file size increase of 150 to 200 Kilobytes.

It is rather surprising that the pdf printer with the largest file size managed to create the lowest file size converting the web page. The three other printers are again close to each other, with DoPDF a little bit better than the other two.

Some pdf printers may come with options to reduce the file size of the resulting pdf documents, for instance by compressing images. All tests have been conducted with the default settings.

This test concentrates on file size, and there may be other factors playing a role for users, pdf quality a top one. A difference of a few hundred Kilobytes makes no big difference if the documents are stored on a desktop PC, they can however have an impact if the pdf documents are stored and accessed on mobile devices like ebook readers or smartphones with limited space and processing capabilities.

Have you been working with pdf printers? If you did, tell us about your experience in the comments.

Martin Brinkmann is a journalist from Germany who founded Ghacks Technology News Back in 2005. He is passionate about all things tech and knows the Internet and computers like the back of his hand. You can follow Martin on Facebook or Twitter
View all posts by Martin Brinkmann →
Previous Post: « Face Recognition Software is a Big Organizational Help when Done Properly
Next Post: Organize Tangles of Files by Quickly Creating Daily Folders »