Over 300,000 Android Phones Are Being Activated Every Day

Back in August, Google's Andy Rubin proudly boasted that Android phones were being sold at the rate of 200,000 worldwide every day.Â  The statement drew snyde remarks from Steve Jobs.Â  Now, Rubin has proudly tweeted that 300,000 Android phones are being activated every day.

There can be no doubt that the smartphone market is still growing and has some space to grow into for the next few years.Â  There is also no doubt in this commentators' mind that there's more than enough space in the market for Android, Windows Phone and iOS with all parties concerned making healthy profits.Â  Frankly, variety like this should be encouraged.Â  Whenever I've gone to upgrade to a new handset I've always looked for something different both in the hardware and OS as a break from what I've been living with for the last two years, but now I can see those days coming to and end which is a shame. 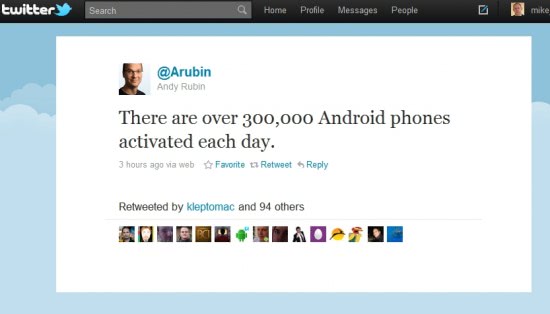 As consumers we should continue to support all three of these mobile OSes (plus Blackberrys and even Symbian and WebOS if Nokia, Sony Ericsson and HP get their collective acts together).

For these reasons I frankly have little interest in what Steve Jobs, Steve Ballmer or anybody else in the tech industry called Steve has to say about these figures.Â  It's great that Android is flourishing in the same way that it's great that both iOS and Windows Phone are selling really well too.

To me the smartphone market is a reminder of the home computer revolution of the early 1980's when you could pop down to your local electronics store on a Saturday morning to be wowed by all the different types of operating system and the different ways of doing things, from the Vectrex console to the Sinclair Spectrum, Commodore 64 and the wonderful little Oric 1 with its explode command.

Since the beginning of mass adoption of the PC allÂ the innovation of the 80'sÂ has been homogenised into a single, and rather dull, way of working.Â  Thus I urge all of you to continue to buy iPhones and Android handsets and to continue evangelising about them to your friends and onÂ social networks and blogsÂ for as long as you can.Â  For me, I'm getting a Windows Phone... 'cos it's bestÂ  :P