A close look at the Android OS

Android OS is about to make the migration from mobile phone to netbook PC (most likely thanks to Asus). If you've not seen an Android-based phone, you most likely are not aware just what the possibilities are.

Although Android won't take the desktop or standard laptop landscape by storm, the netbook landscape COULD be totally retooled when Android becomes a viable solution for those small portable devices.

I do have an Android-based phone, but that wasn't enough for me to know if this new OS is a viable alternative for the network laptop. In order to get a good enough experience, I thought I should get Android up and running in a VirtualBox virtual machine. I was surprised how easy this was. Equally I was surprised to see how well it ran. Although lacking a lot of functionality (and obviously still tightly knit into the fabric of the mobile phone technology, it was a quick and easy way to see how this operating system would function. So let's get Android OS up and running in a virtual machine and take it for a spin.

Update: The original website of the project is no longer available. You can check out Android x86 on Sourceforge.

Getting the ISO and putting it together

The first thing you have to do is download two pieces of the Android Live ISO image. Get the first part here and the second part here. Once you have these two pieces you need to splice them together. In the Linux operating system this is simple. Follow these steps:

The command in step three will piece together the two ISO parts into one, complete ISO image that can be used with VirtualBox.

I will assume you have read the VirtualBox articles here on Ghacks. You might want to go over my article "Installing Windows XP as a virtual machine on VirtualBox". The steps for creating the Android virtual machine are similar to this with only these differences:

That's it. When you select your image file your virtual machine will start up and, eventually, you will have a running instance of Android OS.

As you can see, in Figure 1, the Android desktop is fairly similar to that of the mobile phone version. What you see is the Google search bar at the top, a few application icons on the bottom, and the sliding tray to the right.

If you click the left-pointing arrow on the sliding tray you will see what is currently included in this early release of the Android Desktop OS. Figure 2 shows this tray in the exposed position, revealing a number of clickable icons - all of which do function.

I have tried to install apps onto the Android Desktop OS, but to no avail. The web browser does work as does a few of the other applications. You should not be surprised to hear the phone-based apps will not work on the desktop. I am surprised these have been included in this release of the OS.

The browser works well enough to demonstrate what Ghacks looks like. Take a look at Figure 3 too see everyone's favorite how-to site as rendered in the Android Desktop OS's browser. Not too shabby.

The Android Desktop OS is not nearly close enough for public consumption. But its alpha-stage of development doesn't prevent curious geeks, nerds, and the like from wanting to know what it looks like. And from what I have seen, if Android continues with development, they could have something really special for the netbook landscape. Let's keep our fingers crossed. 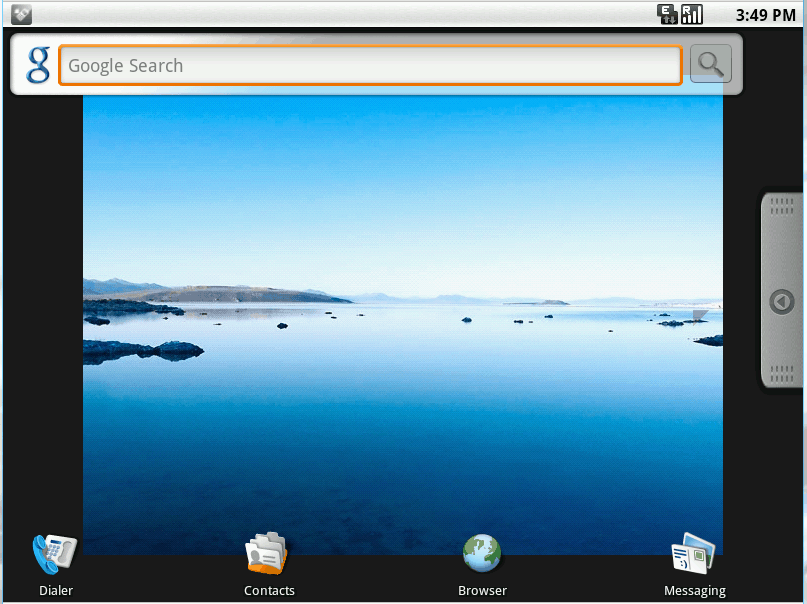 Article Name
A close look at the Android OS
Description
Android OS is about to make the migration from mobile phone to netbook PC (most likely thanks to Asus). If you've not seen an Android-based phone, you most likely are not aware just what the possibilities are.
Author
Jack Wallen
Publisher
Ghacks Technology News
Logo