Moving With Motorola Motus: The Leaks And Rumors So far

Okay, so we have more rumors about the Motorola Motus. We have specs, features, a new name and also a very shaky picture.

I mean it looks like it the camera was attached to the hull of a small fishing boat on the Bering sea or something! Nonetheless, now that it looks so close to coming out, lets look back and see where it all began.

It was a fine day in October and everything was humming along as usual. Then, a leak happened.

In October this year, an internal roadmap was leaked which showed Motorolaâ€™s plans for the next two quarters. It had the Sholes on it and the Motus too. Thus far, that leak has turned out to be quite accurate. [read] 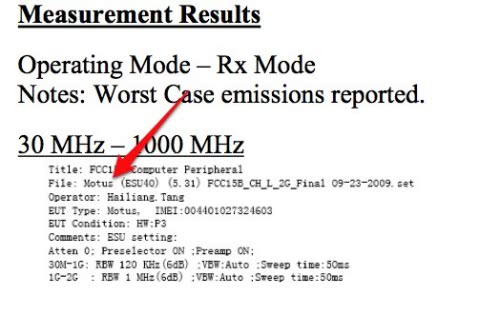 And then, a day came early this month when a new Motorola phone hit the FCC. Of course, it made its way to the blog world like all other big findings before it. It is a triband HSPA device and it carries the name Motus. As we all know by now, the Droid was already already looming over us at that point. [read]

Then yesterday, we had the first leaked photo. So lets take a close look at it. It is a typical candybar smartphone with a slide-out full QWERTY keypad. The keys look flatter than even the Droidâ€™s keys if anything. It reminds of the chemically etched keypads of the RAZR days. They used to be pretty flat out too. The picture is quite hazy, so there isnâ€™t much more to talk about, except that it somehow looks pretty thin. [read]

And just a while ago, we had more news of this. The details have been leaked and it is apparently heading for AT&T. It is triband alright â€“ 850/1900/2100MHz, 7.2Mbps HSDPA, 3.1â€ capacitive touchscreen display with 480x320 resolution. Thereâ€™s also an expansion slot supporting microSD cards and a Qualcomm CPU clocked at 528MHz. And this is an Android phone. Motorola is on a roll here. I wonder what the Zeppelin is going to be like.

it also has been named as the Backflip, probably. There has been a tip off that the phone includes features such as a reverse flip keypad and rear directional touch pad. With all this 'rear' I wonder what it will look like in person. [read]

Still, I think Motorola has gotten stuck in a rinse-repeat routine. They are constantly bringing out phones that are not really all that different from each other. Some are just better made with better features (like the Droid) and some are simply stripped down versions of those better ones. The overall design concept remains the same - put in candybar form factor, add slideout keypad, use Android OS, decide on how expensive it will be, done. Droid, Cliq, Dext and now Motus/Backflip.

ADVERTISEMENT
Summary
Article Name
Moving With Motorola Motus: The Leaks And Rumors So far
Description
Okay, so we have more rumors about the Motorola Motus. We have specs, features, a new name and also a very shaky picture
Author
Shailpik
Publisher
Ghacks Technology News
Logo
Advertisement

Previous Post: « Sony Ericssonâ€™s Kurara Is More than What You Think It Is
Next Post: « Samsung Diva Phones Turn Up The Bling Factor