A report about a new Flash vulnerability that affected the latest two versions of Adobe Flash was spreading like fire on the Internet yesterday. The Flash Vulnerability was used on specially prepared websites that would exploit the vulnerability to download information and install additional malicious software.

The latest version of Adobe Flash can be downloaded at the official website. The exploited vulnerability was fixed by Adobe on April, 8 2008 and a detailed report is available here. 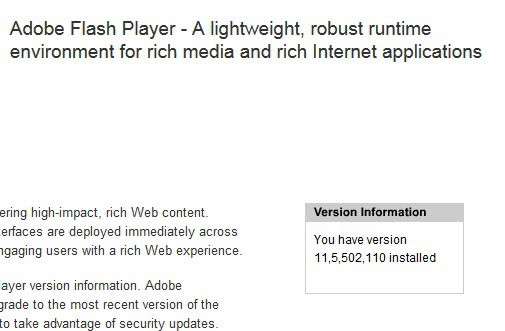 Update: You can verify that you are running the latest version of Adobe Flash Player on the official Adobe website. Here you find the version installed on your system, and the latest version that Adobe has released for all desktop and mobile operating systems.

The page links to the download center where the latest version can be downloaded and installed on the system. The page lists downloads directly on the page.

Martin Brinkmann is a journalist from Germany who founded Ghacks Technology News Back in 2005. He is passionate about all things tech and knows the Internet and computers like the back of his hand. You can follow Martin on Facebook or Twitter
View all posts by Martin Brinkmann →
Previous Post: « Use Netflix Watch Now on more than 3 PCs
Next Post: British Telecom Phorm report leaked »