Play around with binary toys

Yes, we could chuck a lot of ones and zeros at each other (which would probably be fun), but until I have those in production, let me show you a cool desktop toy or wallpaper, or screensaver, I honestly don't know which category this Binary Toy falls in.

Binary Toys is a simple executable file that will put one or more creatures on your desktop. The creatures look a bit like voxel (triangle shaped pixel) creatures, or perhaps some Tron characters and will happily trot around your screen to their hearts content. You can pick them up, drop them, throw them around, following the laws of physics, but they will move on their own, in an actually quite lifelike way.

There is absolutely no point to all this, but it is quite cool. The application could be a bit more advanced with perhaps an easy way to create your own creature, but if you just want some little dudes running around the screen it's a great choice. I seriously hate any type of movement on my desktop, but I am using this as a sort of screensaver, for which it does very well.

Update: The program worked well under Windows XP, but it was not clear if it is also working under newer versions of Windows. I have taken Binary Toys for a test drive on  a 64-bit Windows 7 Professional system and it worked just fone on that system as well. 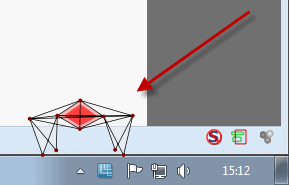 Once you start the program, after downloading it to your system, you will immediately see the binary toy starting to walk around on your taskbar or other positions on the desktop. You have a couple of keyboard shortcuts available to control it besides using the drag and drop approach to move it to another position on your screen.

Besides keyboard shortcuts, you can also right-click the toy and make modifications to it this way. This ranges from starting another toy, there are several types available to changing the form of a toy to another one or changing the toys size from normal to jumbo.

I'm a 24 year old guy writing blogs, playing music, singing, playing bowling, reading, doing a bit of handcraft, working away on a number of projects, the list just seems to grow and grow, and that's the way I like it :)
View all posts by Daniel Pataki →
Previous Post: « Extend Notepad++ with Plugins
Next Post: How to burn Bin images without cue file »