Way back in February I found a cool tool to browse Wikipedia from the desktop called IndyWiki, so let's get our hats and whips ready and a take a look at the application.

My first impression was that this is too simple, it doesn't have any fancy buttons, it looks like it's lacking some features and I generally got the impression of a quick mock-up program. When I started using it however I found that while some of my initial comments were well founded, the application is surprisingly usable, and at the very least, it provides a different experience than we're used to.

Basically you search for a term and two things happen. You are taken to the Wikipedia page of the term (or disambiguation page), but the page itself doesn't load, only the table of contents and the text. While this is happening, images are also loading at the top, which have some relevancy to the term, These images are also from Wikipedia, but not necessarily the same article. 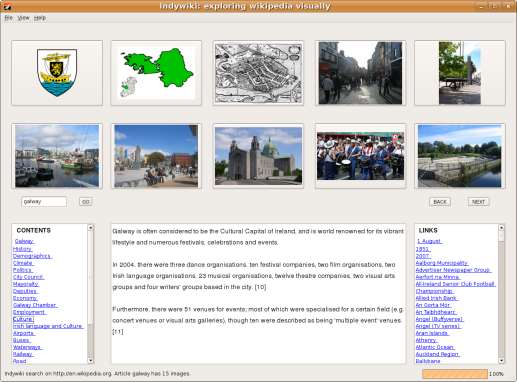 You can navigate through the Wiki page by clicking on the table of contents entries. This means you get shorter snippets of information, for some this will help, others will not really like this function. The pictures are pretty usable as well, overall, I like the features the application has.

On the other hand, it really is lacking in features. While it is a cool new tool, as far as I'm concerned it is still easier to browse Wikipedia itself online. If pictures could be streamed from Flickr as well, and the contents could be pulled from dictionary.com and other services, it would make the application much better. The option to have an offline repository for articles you save, or snippets you capture is just begging to be put in, you could build your own personal knowledge base, even your own Wiki in minutes.