I got a new Nokia N73 with a USB cable recently and have been searching for games and applications that I can download without charge to install on my new mobile phone. I have never put much thought into apps and games before before mainly because of my laziness and an old phone that had no data cable.

The major problem with applications for mobile phones is that they are most of the time not compatible with all mobile phones. You sometimes have a five or six versions of the same application and you have to download the correct one for your mobile phone.

Not everyone may agree with the selection that I made and I would love to hear about applications that you use.

MobiChat - Use AIM, MSN and Yahoo on your phone 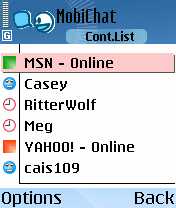 Update: as you can see, some of the applications are no longer available. I suggest you visit the Get Jar website if you are still having a phone with Nokia's Symbian OS or a comparable operating system as it offers a wide range of applications for it.

Modern phones come with app stores that are accessible from the phone directly in form of an application or web store, and software like Apple's iTunes software that can be used to browse and install apps on the phone.

Magisk, the Android modding tool, is still with us