If you work regularly with files and file operations in the Windows operating system, you will quickly come to the realization that Windows Explorer, the system's default file manager, is not well suited for many of the tasks that you need to execute on the system.

You have some options -- all not ideal -- for instance when it comes to copying files or folders from one location to another. You can select all entries, right-click them, select copy, and navigate to the new folder to paste the contents, or open two Explorer windows instead to make the copy operations more comfortable, for instance by using drag and drop.

Many file managers offer an easier way to work with files, for instance by displaying two Explorer panes in the interface so that file operations such as copying or moving are easier to handle. 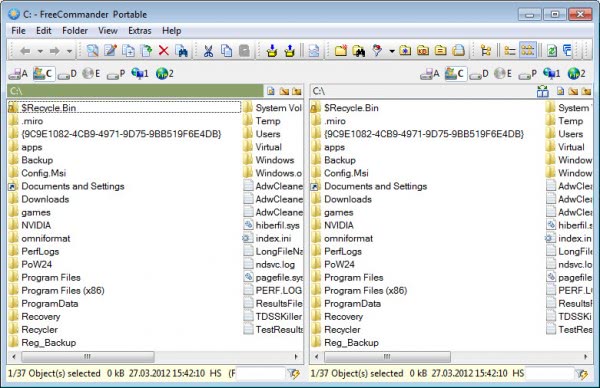 Free commander offers some additional features that make it a valuable tool for every Windows user.

You can use it to verify and synchronize files and folders, wipe files securely so that they cannot be recovered anymore, calculate folder sizes, split and filter files and much more. It has a built in file viewer and can read zip, cab and rar files as well as a multitude of other file formats.

A great feature is that it can be run not only from the hard drive but also from an usb drive, CD or floppy disks as it is offered as a setup version and portable version on the developer website. Just run it from the location that you've chosen and it will work just fine.

Free Commander is a powerful third-party file manager for Microsoft Windows. It supports the majority of features that Windows Explorer supports and a lot of other features that the default file management tool on Windows does not support.

The program supports additional features however such as working with nested archives, support for plugins, folder comparisons, file modifications, quick viewing of files, filters, and a search module that finds files inside archives as well.

Updates for Free Commander XE were released regularly by the program's developer. The latest version is compatible with all recent versions of Microsoft's Windows operating system