It seems that articles that cover running Linux in Windows are becoming more popular with every passing day. I published one a few days ago (using the excellent Vmwareplayer) and would like to introduce another method of achieving the same goal.

Like the last time Linux will be embedded inside Windows using virtual machines. This has some advantages but also some disadvantages which I'd like to address first. Many users don't like the idea of installing a second operating system, messing with the computer's partitions and boot configuration, and probably having to setup their first OS again because of errors that happened along the way. A Linux system run in Windows offers a less complicated and technical approach as it does not affect the underlying operating system at all.

Users can get a feel for Linux without having to mess with it. The difference to a Linux live CD is that you have a writable Linux instead of a CD which is not writable at all.

To get things started you need to download a copy of damn small linux and extract it to your hard drive once its downloaded. Make sure you download the dsl-embedded.zip file which is located in the root folder of every mirror.

Please note that you download an ISO file, you have the option to mount it using daemon tools for instance or use Winrar to do so.

Locate a file called dsl-windows.bat in the main dir and start it. Linux should load up and you are ready to use it. 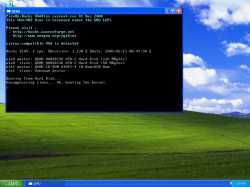 Update: The method still seems to work after all these years, thanks to Damn Small Linux being updated regularly by the development team. Windows users who'd like to run the popular Ubuntu software instead can check out the Virtual Machines page over at the official Ubuntu documentation website where a list of virtual machine solutions are linked from.

Previous Post: « Linux Live CD for Windows Users
Next Post: « 10 things you should know before every Linux installation