Finally, after a very long time, Daemon Tools 4 has been released. For those who never heard about this fine piece of freeware, it can be best described as a CD and DVD drive emulation software. It simulates up to four additional CD or DVD drives connected to your PC that you can use to mount disc images with to access the contents of the discs without having to have the physical discs in reach.

This procedure is really helpful if you are using cd or dvd media often but are to lazy to get them and put them into your drives. You create a image of it and place it on your hard disk. When you need to access data from the cd or dvd you don´t need to go and get it, its already setup. Daemon tools itself is not creating images, you need additional software like Nero for this.

The servers are really loaded at the moment, could be that you will have to wait until your download starts.

DAEMON Tools is freeware that allows you to backup physical discs to a virtual format on your PC. There is a paid version that extends this capability, but with the basic version (DAEMON Tools Lite) you can emulate up to 4 CD/DVD virtual drives on your PC. This tool is useful have if you are interested in creating ISO and MDS images from original discs. 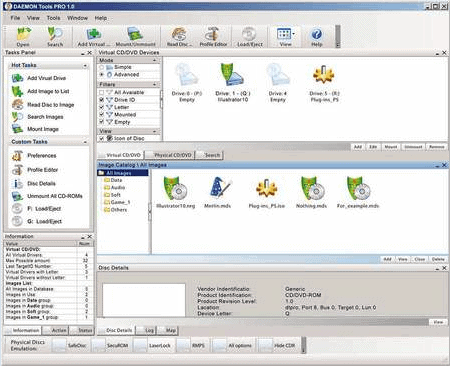 The virtual drives created with this software contain all of the data from the original source. These will appear on you operating system as though they were real. The point of virtualization is to take real data and utilize disc images to create drives that are “virtual” but they work like the real thing. This is practical for using virtual machines and the same methods can be used to convert discs of hard data into usable virtual data.

You start by selecting a virtual drive and then use any disc image that you wish to mount. DAEMON Tools will create the mounted disc image in My Computer and you can start working from there. You will quickly notice that the virtual disc works just like the original. Now you can start considering the possibilities. If you have experience with virtualization, this is an exciting piece of software for you to try. Once you see what it can do, it is likely that you will want the Pro version so that you can take the capabilities even further and integrate disc images for operating systems into viable virtual machines. You know what to do, if that is the case.

You can take CDs, DVDs and even HDs or Blu-Ray from solid discs and make them virtual, while also having the ability to us ISO images that you have created at earlier times. All of this fits into the Daemon Tools kit. You simply use this software to create .iso and .mds images from solid media. Formats that are supported include .b5t, .b62, .bwt, .ccd, .cdi, .cue, .nrg, .pdi and .isz.

The GUI can guide you through all of this “mess” and allow you to create easily accessed virtual drives. If, however, you want to use a command line, there is an excellent command line interface that can give you more control. For advanced users, this is like being a kid in a candy store, except you are a techno-kid dealing with file formats.

Can these virtual drives be converted to your own disc media? Yes, they can. That takes a little more tweaking and you need to remember that copying certain hard disc data and disc media does have legal implications. It is best to keep this as a way to organize disc data into virtual formats for ready access, strictly for personal use. For advanced users, there is much that can be done with this software. You can automate from the command line interface and perform basic actions from the DAEMON Tools gadget on the Windows Desktop, but where you take it from there is up to you.