If there is one thing that laptop users worry about constantly, it's the device's battery life. Many users keep their computer plugged in at all times for work/gaming purposes. But sometimes you may have no choice but to use the system on battery power, like when you're travelling.

Despite fussing about the battery, many users tend to not notice their laptop's battery level until the computer alerts them that it is running low on juice. Windows doesn't display the battery percentage, you have to click on the tray icon to see the current level. If you don't want to use a third-party program to display different battery icons that provide you with better information, you may be interested in TitleBarBattery for Windows instead.

TitleBarBattery is a small program that displays your laptop's battery percentage in every window that you open. It is a portable application, which is nice since you may not want it running when your laptop's on AC power.

Extract the archive and run TitleBarBattery.exe, and you should see the battery percentage appear on the title bar of program windows that you open. You don't need to restart any window for it to work. The - sign before the percentage indicates that the battery is discharging. If your laptop is plugged in, the tool will display a + sign instead.

The tool has a small caveat, the battery indicator may not appear immediately in new windows, or if you navigate to a different page or folder. For example, if you're using a web browser and switch tabs, the battery info will disappear temporarily. This is not a bug. and here's why.

The program's official page mentions that TitleBarBattery updates the status once every 15 seconds. So if the stats aren't displayed, you just have to give it a few seconds, and the info will be displayed. The tool can also be useful if you're using a multi-monitor setup.

TitleBarBattery runs in the background as a system tray application. Currently, it has no options that you can customize. The program's developer, SKWire, mentions that an option to set a custom update interval will be added in the future.

Mouse over the program's tray icon and a tool-tip pops-up, it displays the current battery percentage, the status such as charging or discharging, and also displays an estimated time remaining for the battery to run out. Right-click on the application's icon and click on Power Options to go to Windows' built-in power settings.

The tray icon isn't very useful since it does exactly what Windows' built-in tool does. But I do like the vertical icon and its appearance. Speaking of which, the icon changes dynamically to indicate the battery level, so if it is in the 70-ish range, it sort of looks like a 3/4th full battery. You can close the program by selecting the Exit option from the tray menu. 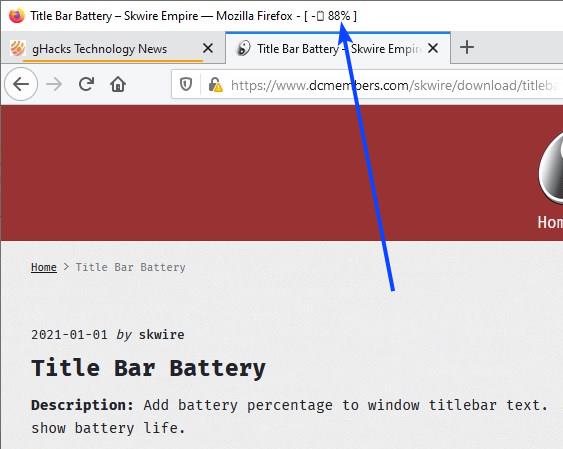 It is worth noting that TitleBarBattery does not work with programs that have non-modifiable title bars. I noticed that it didn't show up when I was using Microsoft Office Word or Thunderbird. I tested it with programs I use everyday like Foobar2000, Firefox, KeePass, Explorer, ShareX, QuickRSS, CudaText to name a few, and the tool worked flawlessly with all of those. 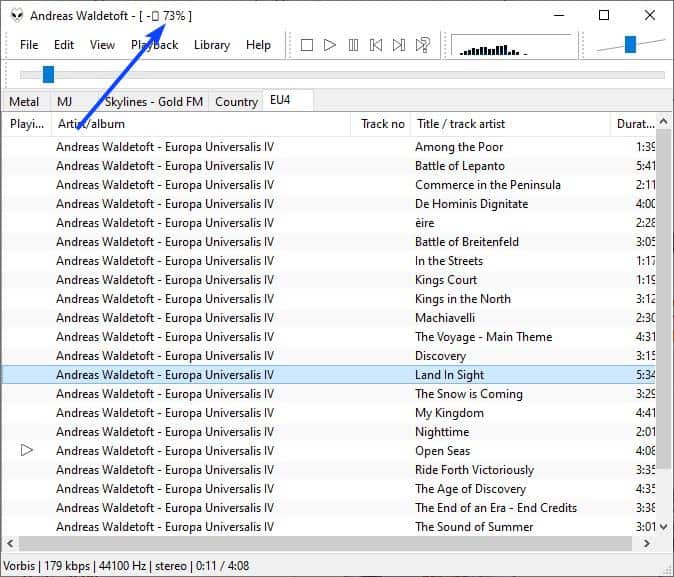 TitleBarBattery was among the list of programs featured in DonationCoder's NANY 2021 Wrap Up. You can check the full list of applications at the official page.

Previous Post: « Run tasks automatically, monitor your email inbox, and run web searches with TaskRunner
Next Post: Topydo is a command-line based program for Todo.TXT »