Import lists of URLs in Firefox

URLs List is a free browser extension for Mozilla Firefox that you may use to import plain text lists of URLs in the browser, and to export them.

Firefox's session restore feature takes care of the loading of sites that were open in a previous browser session. There is however no option to load a large list of URLs with little effort in the browser.

Say, you have extracted a list of URLs from Google's Search Console and want to check them, or you want to load a list of URLs that you got from elsewhere, for instance from a forum or a file that was posted online.

I ran into issues with Firefox Nightly recently not importing the session correctly. This was caused by Mozilla changing the json format, and nothing I did seemed to work. While Nightly would start, it would not load the previous session. I used URLs Text to save the previous session using another version of Firefox, and load it again in Nightly.

While you can go ahead and load each URL manually in Firefox, or load multiple URLs from the command line by using the syntax firefox URL1 URL2 URL3, a simpler option may be preferred as should make the whole process more comfortably. 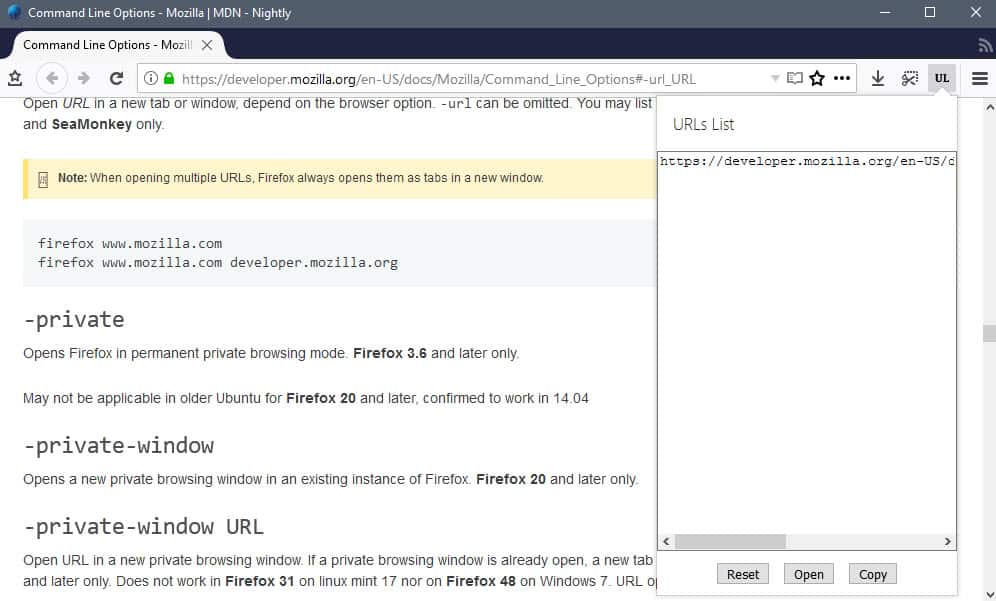 URLs List is an open source add-on for the Firefox web browser. It is a WebExtension, which means that it is compatible with the upcoming Firefox 57 release.

The add-on adds an icon to the main Firefox toolbar that powers its functionality. A click on it displays the list of URLs that are open in Firefox at that time.

You can hit the copy button to copy the whole list of addresses to the Clipboard, or use the import button instead to load additional resources.

To do so, paste the list of URLs, in a one-per-line format, in the interface, and hit the open button afterwards.

URLs List supports direct editing of the list of addresses as well. Just use the interface like any other plain text editor, and make sure you add one URL per line to it. Once you are done, click open to open multiple sites at once in the Firefox web browser.

URLs List is a specialized add-on for Firefox. It comes in handy in numerous situations though; from importing a bulk list of URLs in Firefox to exporting the list of open addresses.

Previous Post: « Mozilla should hide legacy add-ons on Firefox AMO
Next Post: How to disable animations in Firefox Photon »