Amazon Studios released Storywriter today, a free cloud-based screenwriting application that anyone with an Amazon account can use.

Internet companies like Amazon or Netflix started the production of original series and movies years ago in an effort to reach a certain level of independence from networks and film studios but also to break away from limitations such as TV show episodes that always had to run the same amount of time.

There are other differences to classic studios. Amazon for instance has an open door policy which means that anyone in the whole wide world can submit screenplays to the company.

While you can submit your script to classic film studios as well, the chance of it being recognized at all are slim at best and while there is no guarantee that Amazon will pick your script, the chance of this happening seems a lot better.

The new Amazon Storywriter expands on the idea. It is a screenwriting tool that anyone with an Amazon account can use to write scripts. Content is stored in the cloud but the only one with access to is according to Amazon is the account owner.

There is however an option to submit the script to Amazon for consideration. Scripts can be imported from the local system, and exported as pdf, fdx or Fountain files so that you are not limited to submitting the script to Amazon. Imports have a maximum file size of 5 Megabyte. 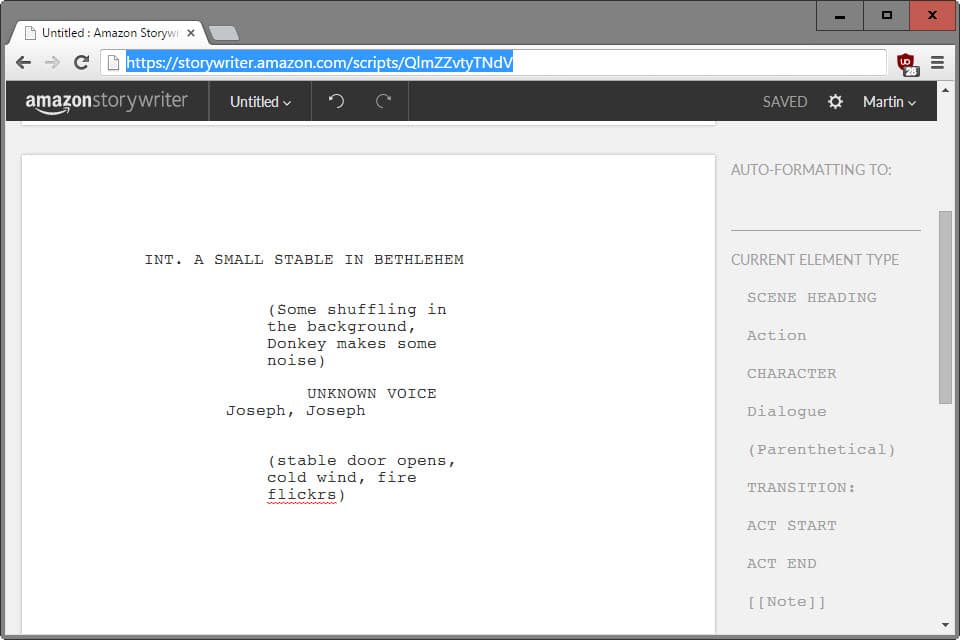 Amazon Storywriter is an online application first and foremost. You may use it offline if you install the official Chrome extension and use Chrome for that, but if you don't, you can only use it online.

The writing app itself tries to make it easier for writers by supporting auto-formatting options among other things.

You may select formats, for instance an action, Character or notes manually as well if you prefer to work that way. If you use auto-format, each element gets formatted automatically based on what you type.

For instance, if you type a name in capital letters, it is automatically formatted as a Character action.

Content is saved automatically, but you may save the content as a draft or create a copy of it as well whenever you want using the main menu. There you find the option to submit the script to Amazon Studios as well.

Storywriter is not the first tool released by Amazon to assist writers. Storybuilder, released two years ago, helps screenwriters create stories for Movies or TV.

Amazon Storywriting is -- still -- a basic application when compared to programs such as Scrivener or other screenwriting programs. Its auto-formatting capabilities are nice and if you follow them, the fact that the screenplay is in the correct format for submission to Amazon is as well, but there is little else the online app offers.

There is no space to store information for instance, characters, locations or even ideas apart from the script itself which means that you either need to add them to the script (and remove them once you are finished), or use a third-party solution for those instead.