Previous versions of Windows displayed a list of preferred wireless networks in the Manage Wireless Network section of the Network and Internet control panel applet. This list consisted of wireless networks the computer was previously connected to, and Windows remembered all relevant connection settings automatically. You could use the list to prioritize wireless network connections, as Windows used it to determine to which wireless network it would connect the computer to if multiple networks were available. It was furthermore possible to remove profiles from the connection manager that you no longer needed.

Microsoft - for whatever reason - seems to have removed the feature from Windows 8 making it more difficulty for users to manage previous connections in the operating system.

The third party application WiFi Profile Manager 8 adds the removed feature back to the operating system. The software displays a list of all previous wireless network connections of the computer in its interface. Listed are the network's name, connection type and mode, as well as the security standard used. 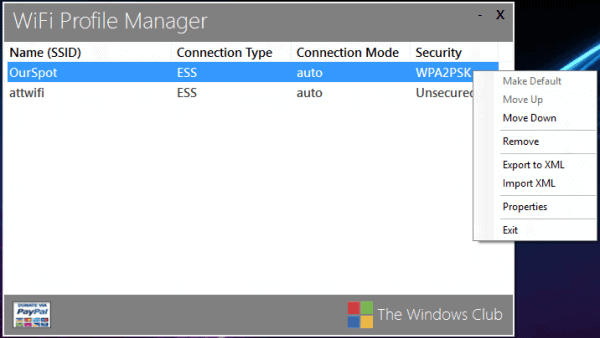 WiFi Profile Manager 8 lets you change the priority of wireless networks easily by moving networks up and down in the list, and make a connection the default connection on the system.

The control menu lets you furthermore remove wireless connection settings that you no longer need, for instance those used while you were on a business trip, open the properties of a connection to display the security key and encryption type, and export or import the connection settings.

Exporting and importing can be handy if you are about to switch from your old PC to a new one, or have bought a second PC. This saves you from having to create the connections on the new computer system anew.

The wireless network profile manager is compatible with Windows 7 and Windows 8, and can be downloaded from the Windows Club website. It is a handy program for Windows users who are about to upgrade or switch to Windows 8 and use the preferred network connection listing regularly.