One of the things that you may want to consider when setting up a wireless network connection or troubleshooting an existing one is the vicinity of other wireless signals in the area. Why? Because you may want to make sure you get the best possible network quality. It is for instance advised to select wireless channels that are not used by other users near your location.

NetSurveyor is a free wireless network discovery software that collects and processes information about wireless access points in real time. The program can be used for multiple purposes, including: 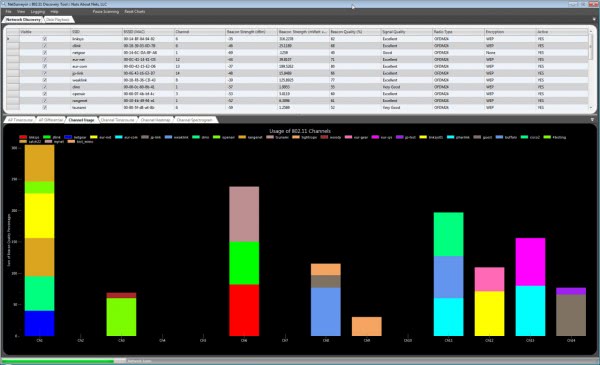 All are listed with their SSID, visibility, MAC address, channel, beacon strength, encryption, signal quality and various other parameters. Graphs below visualize the data. The graphs are divided into tabs in the interface. This includes channel usage and a channel heatmap, a channel spectogram and access point timecourse and differentials.

NetSurveyor is a diagnostic tool that falls under the category of WiFi Scanners or 802.11 Network Discovery Tools. The best known in this category is NetStumbler. A discovery tool reports the Service Set Identifier (SSID) for each wireless network it detects, along with the channel used by the access point (AP) servicing that network. The way this works is that roughly every 100 mSec an AP sends an â€œIâ€™m hereâ€ beacon â€“ and the discovery tool (running on your laptop and using its 802.11 wireless adapter, also known as a station or STA) picks-up that beacon and adds the SSID to its list of known wireless networks. In addition, the discovery tool reports the RSSI (Received Signal Strength Indication) for each AP, which is roughly an indication of how close the AP is to your current location (i.e. how close it is to the client STA). Just to be clear, the RSSI reflects the strength of the beacon as received by the STA â€“ it is not an indication of performance.

NetSurveyor records data all the time. It is possible to pause the scanning at any time. The program supports the generation of pdf reports under File > Create Report.

The basic information provided by the software are beneficial to all users who want to set up or troubleshoot a wireless network. Especially the signal strength quality and channel display is helpful in this regard.

Update: The program appears to require the Microsoft .NET Framework 2.0.