While it is possible to create basic themes under Windows 7, which is in itself an improvement over previous versions of Windows in this regard, it is not possible to create advanced theme packs that easily. And with advanced I mean theme elements that require manipulation of system files.

Basic themes let you change the wallpapers and colors mainly, but not the design of the taskbar, start menu, buttons, or other menus or elements that the operating system makes available.

That in itself is problematic if you want to run the same advanced theme on all of your computers running a version of Windows. For that, you had to repeat the sometimes taxing installation procedure on all systems.

That's however no longer necessary with the release of the Skin Pack Installer System for 32-bit and 64-bit editions of Windows. Windows users who are thinking of installing the program need to pay special attention to the installation process, as it tries to make potentially unwanted system changes (new homepage, search). 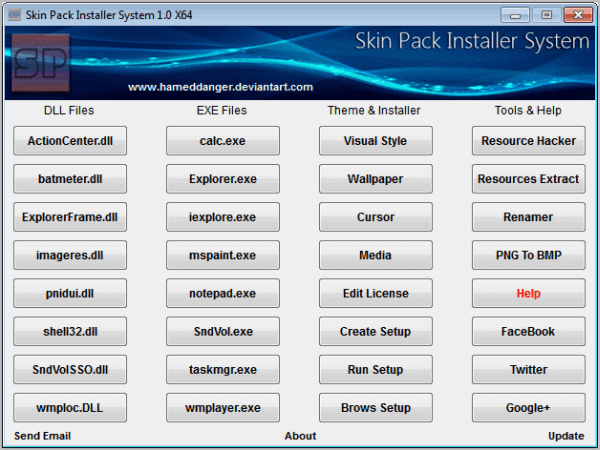 The program provides you with options to create a skin pack with a few clicks, and  to distribute it to other Windows systems.

Skin Pack Installer System lists the various elements and options in the interface. A click on an element opens a file browser to add a custom file to the skin pack. The elements are loosely sorted into the groups dll files, exe files and theme & installer. It is for instance possible to replace shell32.dll, explorerframe.dll, explorer.exe or notepad.exe in the dll and exe files.

Once you are finished replacing the original files with custom ones, you can start creating the setup file. A click on Create Setup creates an executable that can then be run on other computer systems to install the customizations on that system.

The developer has added a resource hacker, extractor, renamer and png to bmp tool to the application which may come in handy during the preparation and creation.

It might take a bit longer to create the theme pack, but it is well worth that time considering that you can install the exact same theme then on other Windows PCs with a few clicks. Plus, it is possible to offer the theme pack as a download on the Internet or a network.

Update: The account the program has been publish on has been deactivated on Deviant Art. If you are running Windows 7 you can check out the Theme Manager application instead or a software like Rainmeter which works with older versions of Windows as well.

Update 2: The homepage of the project has changed. You find it listed on this web page now.  The program is compatible with Windows 7 and Windows 8 at the time of writing.