The first mobile phone that uses the Google Android operating system is just a few weeks away. One of the major selling points of Android is that it is Open Source and that users will most likely have access to a huge database of software programs created by the Open Source community at their disposal. Developers have published and announced applications that will be available when the first Android phone will be released and this article takes a look at 5 that look really nice and may be must haves for many users.

Users should be aware that the Android Marketplace will host free and commercial applications just like the Apple iPhone App Store. Most of the applications listed below have come into existence as part of the Android Design Challenge.

This Challenge pushed the development of many Android applications and was an important step for the plattform.

Compare Everywhere: Compare Everywhere, formerly known as Android Scan, could be the killer application for Android. It uses the digital camera of the mobile phone to scan the barcodes of products to identify them electronically. It offers options to compare prices online, read product reviews and even sample music or video content. An alternative seems to be GoCart which basically does the same.

Cooking Capsules: The idea behind Cooking Capsules is simple: provide aspiring cooks with everything they need to create a tasty meal. From a cooking video that demonstrates how the dish is prepared over the compilation of a a grocery list to shop locations in the vicinity and step by step instructions to prepare the meal. 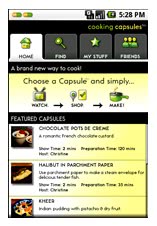 My Closet: The dream application for women. Take pictures of your clothing and the application keeps track and suggests outfits based on weather information and items chosen in the past.

Share Your Board: Jigsaw is an Android application to share, process and capture data on a whiteboard.

Wertago: An interesting application for nightlife enthusiasts that makes use of Google Maps to show the hottest locations in town and provides means to coordinate with friends.

Got any other applications not in the list? Let me know about them. I did not include applications that would track friends and family members. This had various reasons, one being that every family member would need an Android phone for this feature to work.