Microsoft introduced a new user interface thatÂ  it called the Ribbon in Microsoft Office 2007. It was designed to reduce the number of hierarchical menus in previous versions of Microsoft Office. It was a bold move that caused lots of concern by experienced Office users who had to get used to the new Office user interface. Up to this day, there are users that dislike ribbon interfaces with a passion.

Ribbon seems the way to go and Microsoft already made several announcements about their upcoming operating system Windows 7 and the use of Ribbons in default applications like MS Paint and Wordpad.

But Microsoft is not the only company that is trying to push the new interface. A user on the Deviant Art website saw the screenshot of Windows 7 Wordpad with the Ribbon interface and decided to code that for Windows XP and Windows Vista. 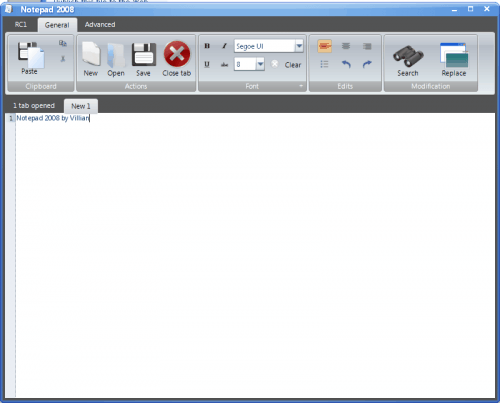 Solo-Dev pushed out an release candidate that is currently supporting plain text documents: A Notepad replacement so to speak with plans to integrate rich text and doc applications so that it will become a Wordpad replacement instead.

The downside of the project is that it requires the Windows .net Framework 3.5. It also uses lots of resources currently but the software developer promised to optimize the code and application so that the computer memory consumption would become less.

The interesting questions leading from this is: Have you worked with Microsoft Office 2007 yet? Do you like the Ribbon interface? Let me know.

Update: The project page the program was offered on is no longer available on the Deviant Art website, and we have removed the link pointing to it as a consequence.

We have uploaded the latest available version of the Notepad replacement for XP and Vista to our own servers, from where you can download it to your PC: [Download not found]

Please note that this is still a release candidate build. Use with caution, we are not responsible for any damages or issues you may encounter.