Game Key Revealer is the equivalent of License Finder for gamers, as it displays CD keys of supported PC games in its interface when run.

As you may know, License Finder displays serial numbers and product keys of software programs that are installed on a Windows system; Game Key Revealer does the same for installed computer games. It is an indispensable tool that scans the computer for game keys and displays every game key that it finds in the process provided that it supports the games in question. 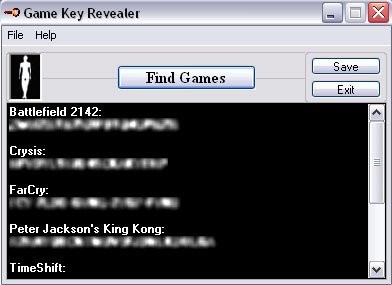 Game Key Revealer supports more than 500 popular computer games from well known publishers such as Electronic Arts, Ubisoft, THQ and Lucasarts. The game key of games like The Sims 2, Call of Duty, Crysis or Far Cry can be displayed if the game is installed on the system.

That's another handy application which might serve you well if you cannot read the game key printed on the CD case, or do not have the CD case at all anymore but only the game CD. Game Key Revealer is fully portable and can be executed from any location on the computer.

Once started the user is presented with a huge Find Games button which crawls the computer for game keys. Every game key that is discovered during the process is listed in the main pane of the application. The list can be saved or printed after the scan.

Update: The latest version of Game Key Revealer supports more than 2000 games. While you won't find the latest and greatest of PC gaming supported by the application, it may be very helpful for older games that you want to find the game product key for.

Update 2: The program has not been updated since 2014. While it supports a large number of games, it cannot be used to display keys for games released after 2014.