I recently stumbled upon STDU Viewer (Scientific and Technical Documentation Viewer), a viewer for tiff, pdf and DjVU documents, the formats often used in scientific and technical documentations. I have never heard the term DjVU before and was a bit puzzled at first. The format that is pronounced dÃ©jÃ  vu is being used to distribute high resolution scans of documents but also of digital documents and photos on the Internet.

DjVu needs only half the size of jpg images for photo while it is on average only half the size of the jpg file. In addition, it offers a far better quality when compared to jpg files of the same size. Look at the comparison between jpg and djvu images, very interesting and a file format to look out for.

It's one of the favorite formats for technical documentations and scientific documents. The viewer itself is a no thrills no frills application that you can use to load all supported formats. It is tab driven which means that you can load multiple documents to switch between them using tabs. The program has been designed with speed in mind, it opens pdf documents as fast, or even a bit faster, than Foxit Reader which is one of the fastest of its kind. 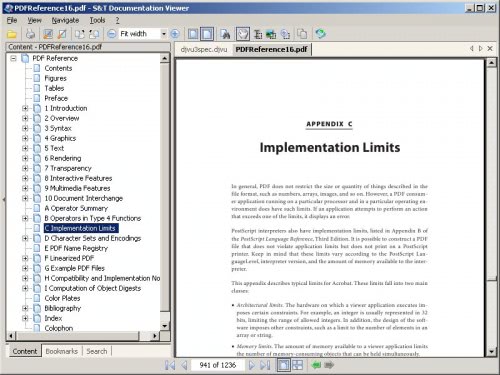 The main benefit of STDU Viewer is the support of the three mentioned formats and its speed. There is not really a reason to change from Foxit Reader to it if you only work with pdf documents on your system. If you use at least two of the formats it might be a viable alternative.

The official djvu website has a download section with additional clients for Windows, Mac and Linux plus an add-on for Microsoft Office.

Update: The program is compatible with all recent versions of the Microsoft Windows operating system. Translations are available in case you want to work with a different interface language