TV Shows are one of the most popular media that get downloaded from Bittorrent. It's very handy for viewing missed episodes of a favorite tv show or to view tv shows in their original language and not the translated version that fails to catch the spirit of the original show. I don't want to talk about the legal aspect. It is my opinion that everyone should make the decision for himself whether he downloads TV shows from Bittorrent.

Ted, which stands for Torrent Episode Downloader, is probably the easiest way to download tv shows from Bittorrent. The application has been designed specifically for that purpose. It comes with a range of preconfigured shows (more than 100) that are displayed by default. Many popular tv shows are listed including 24, Battlestar Galactica, CSI and Lost among others.

It works like the following. The user picks a show from the list and Ted displays a description of that show along with a list of episodes that are currently available. Episodes are just listed as Season 2, Episode 4 which makes it a bit harder to find out if that is the show that you missed for example unless you want to download a full season. 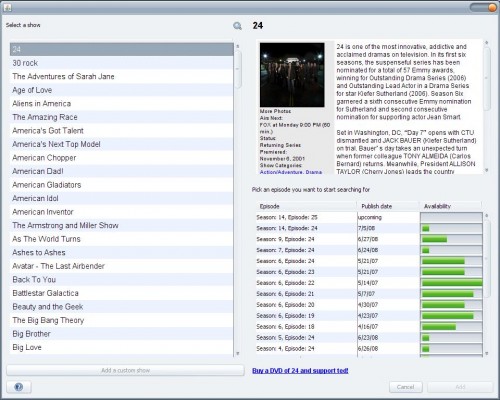 Next to that is the original air date of that show and the availability on the network. The main advantage of Ted is that it is easy to use with close to zero configuration and has a wide assortment of shows in the list. Custom shows can be added to Ted as well. It does have some shortcomings though which I would like to address.

First of all not all episodes of the tv shows are listed which means that you will miss episodes if you use TED exclusively. If you use another Bittorrent client and Bittorrent websites for downloading those shows you could easily download everything from there right away which would make TED redundant.