Skype just recently the first beta of their new Skype 4.0 client that is currently only available for Windows. The focus of this release is to receive user feedback to work further on the client and provide a release version after the summer. Major changes have been made to the interface which comes completely redesigned and provides fullscreen access to the features.

Skype 4.0 is missing several essential features when it is compared to the current release version 3.8 of the VOIP client for Windows. Among other functions Skype Prime, the History, Sending Contacts and Skypecasts are missing in the initial 4.0 release of Skype. A full list of features currently missing from the beta release can be seen at the Skype announcement of this version.

This essentially means that if one of the features is a requirement for your work you should wait with the upgrade until they have implemented it. The new version overwrites the old one and there is no obvious way to go back to the old version of Skype once the beta has been installed on the system. 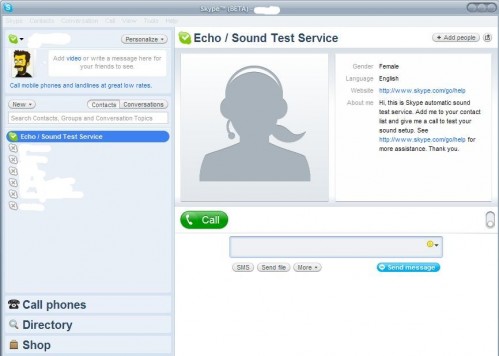 The only possible way would be to use a System Restore Point to go back. This beta version does not allow multiple Skype instances from being launched which is unfortunate for those users who either use Skype extras that require that feature and also for those that use several Skype instances for work, home and other activities.

The window can be resized up to a point but not further than that. Looks pretty much like 800x600 on my screen taken up by Skype as a minimum which is definitely unfortunate.

The major shift in this version will be away from concentrating on phone conversations to video conversations which is unfortunate for me because I do use Skype mainly as a way to call and send messages to some of my friends.

My advise would be to forget about installing this beta client in a work environment. It should not be that problematic for most home users though who would like to test the new client. Everyone else probably fares better with the 3.8 client.

Have you tried Skype 4.0 ? What is your opinion about the software ?