When I was a child I played Risk many times with my friends. I could not get enough of this game. We even created our own house rules to make the game more exciting. I have been playing JRisk every now and then since it was released and think that it is a nice Risk clone with some great features.

What I really like about is that you have the choice to either download it or play it on the developers website. You do need Java to play the game but this should be installed on most computers anyway. The version that can be downloaded should be best suited for most users because it plays definitely faster and has an option to save and load games.

Before you start a game you select the players that you want to play against including other humans in hotseat mode. The standard Risk world map is selected but you can select a different one creating a new unique experience. Maps of the Roman Empire and the London Tube are available for instance. 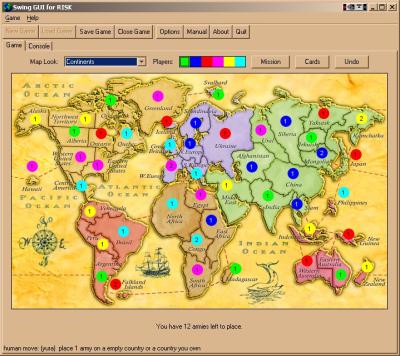 It is furthermore possible to download dozens of maps from the official website. I personally like Jrisk because it is not complicated to play. A game does not last more than maybe half an hour and is still great fun.

Update: Please note that the game has not been updated since 2005, a long time for a game. I would like to provide you with two alternatives, both free of course, that you can play instead. There is Domination, a game for Windows, Mac and Linux, as well as several mobile platforms such as Android. Note that the desktop versions require Java to run just like JRisk.

Warlight is a web version of Risko that you can play against the computer or against human opponents. What I like about Warlight is that you have access to dozens of different maps, both real and fantasy, which adds to the variety of that particular game.