Do you have a Windows operating system and wondering if there are Windows updates for your computer? We highlight new releases, what they do, where you can find them, and how to download them. We’ll also discuss why you need them on your device.

The Autopatcher development team has released a new version of their popular system updater. The program is a downloader and installer for Windows operating system and software patches. It can therefor be […]

Microsoft has published all security patches for today's Patch Day a few minutes ago. The patches are available via Windows Update, Microsoft Update and the individual security bulletins that describe the nature […]

Tomorrow is a day that could force many system administrators into overtime as both Microsoft and Adobe plan to release security patches for several of their products. Microsoft alone plans to release […]

Rizoneâ€™s Internet Recovery Kit is a fully portable Windows repair software program that addresses two issues that Windows users might experience while working with the operating system. The first issue is a […]

Internet Explorer 8 To Be Distributed Via Automatic Updates

Microsoft has the habit of releasing security patches on one Tuesday each month. Time critical patches can be delivered out of schedule but that did not happen that often in the past. […]

Microsoft released another batch of patches using their regular schedule. A total of eight security bulletins have been published that contain descriptions of security vulnerabilities of which six have been classified as […]

Microsoft released only two patches for their products on this November's Patch Tuesday. The Microsoft Security Bulletins MS08-069 and MS08-068 patched two vulnerability with the status critical and important. The vulnerability rated […]

It was always a mystery to me why Microsoft released security patches on one day only considering that an unpatched security vulnerability could be exploited easily in that time. The impression with […]

Microsoft has released four Microsoft Security Bulletins for September 2008. All updates are rated critical and it is recommended to update the computer system running Windows operating systems or Microsoft software as […]

Windows hotfixes usually solve errors and problems after they have been installed on a computer system. It happened in the past however that they did produce additional errors that could bring a […]

Users who want to update their Windows operating system can use the automatic updates feature to download updates for Windows automatically, visit the Windows Update website in Internet Explorer or use one […]

Lets talk about inefficiency. Microsoft just released an update that adds five words to the English dictionary file that has an impressive size of 56 Megabytes. The five words that are added […]

Windows is not having the easy command line options to update the installed drivers or applications that Linux has. Many users forget to update their system drivers at all after installing them […]

I have examined the new Autopatcher Updater before and the program was kinda buggy back then. Some time has passed and the Autopatcher team managed to produce several new versions and recently released version 1.04 of their Autopatcher Updater. It felt right to take another look to see what has changed since the early beta releases.

I read today that Windows Update would not work with the beta version of Internet Explorer 8. I did want to check it out for myself before writing about it and went to the Windows Update website which greeted me with the error message "The site cannot continue because one or more of these Windows services is not running". The services mentioned were Automatic Updates, Event Log and Background Intelligent Transfer Service (BITS).

Microsoft released a hotfix a few days ago that is fixing a problem that affected some Windows Vista and Windows XP systems. the knowledge base articles Performance for a WPF-based program that uses the layered windows feature may be less than expected in Windows Vista and Performance is poor in a WPF-based application in which you have enabled layered windows in Windows XP or in Windows Server 2003 are unfortunately offering only a mediocre explanation.

Autopatcher was the perfect solution to update your Windows operating system while it lasted. You could download all patches to your local computer and execute them there. This made it possible to download patches once and update several computers locally without download the patches several times from Microsoft servers.

Microsoft is releasing collected security patches each month for their Windows operating systems. I'm not a fan of this approach because I would feel safer and securer if they would release patches as soon as they would be ready to be released which would secure computers and reduce the time that someone could exploit these security vulnerabilities.

Microsoft killed the Autopatcher project some months ago which was a shock to everyone who used their monthly Windows Update collections to update their computer(s) which had several benefits such as downloading the updates only once and not connecting to a Microsoft server at all.

Automatic Updates means that your computer will check periodically if updates for Windows XP are available and install the automatically if it finds any. The computer needs to be restarted after installing those Windows updates because some files can't be exchanged while the operating system runs.

How to block "Restart your computer to finish installing important updates"

While the automatic update function in Windows XP and Vista is a good way to keep your system up to date with the latest patches it has the nasty habit to nag the user after downloading the patches to the computer. I suppose everyone has received a message that asks the user if he wants to reboot now or reboot later in XP or the dialog box that asks you to restart your computer to finish installing important updates in Windows Vista.

I have written several times about the Autopatcher project which was basically providing users with the opportunity to download one executable file that contained all official patches for their Microsoft operating system. This method had a lot of advantages over downloading patches from Microsoft servers: You would save bandwidth if you had to apply the patches to more than one operating system and did not have to rely on the automatic updates website to select the patches.

Get your Microsoft Security Patches now

Microsoft released a total of nine security patches yesterday fixing six critical and three important vulnerabilities on its August Patchday. Those updates were available on both my Windows XP and Windows Vista system and Microsoft in Windows Update but can also be downloaded as single updates from the Microsoft website.

The autopatcher team finally managed to update all of their update packages for Microsoft operating systems to July 2007 which means that you can download all patches that Microsoft has released for your operating system and apply them at once instead of using automatic updates or connecting to a Microsoft server at all.

I mentioned three days ago in my blog that the Autopatcher team released the June 2007 patches for Windows Vista and just now they announced that the updates for XP can be downloaded as well from their sites. In case you missed the last post here is what Autopatcher does.

Autopatcher is a very convenient and easy way to patch your operating system with the latest patches, updates and security fixes without connecting to a Microsoft server at all. All that needs to be done is to download the latest release of Autopatcher and run it. You may then select the updates that you want to install and everything else is done automatically (that's the auto in autopatcher, hehe) 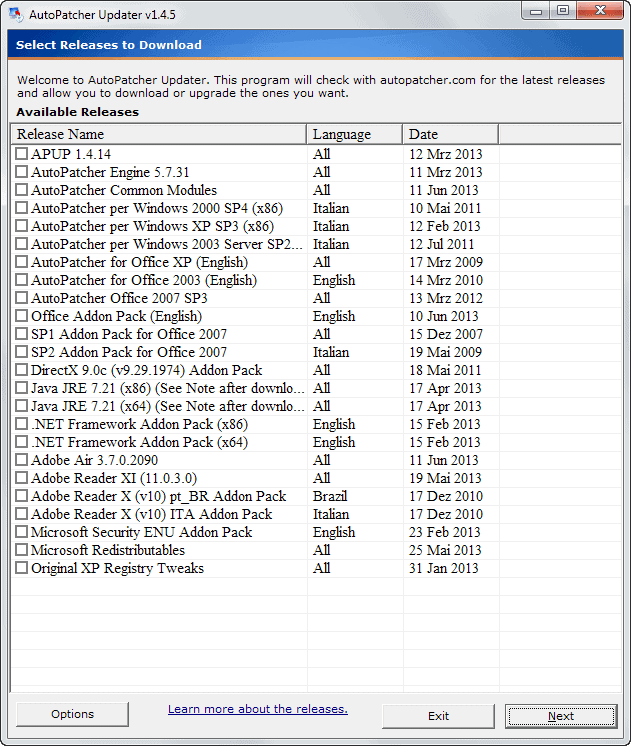 I'm using a program called Autopatcher XP on my Windows XP system to apply all patches that Microsoft released in a month at once without connecting to Microsoft at all. This is a very convenient way to patch a operating system and I was looking for a way to do the same for my notebook running Windows Vista Home Premium. I found a reference to Autopatcher Vista on the excellent Windows Vista Tweaks blogs

The German computer magazine CT analyzed the new WGA Notification that is installed during Windows Update. They decided to cancel the installation and immediately after doing so the firewall reported that update.exe tried to connect to the internet. This caught their attention of course and they decided to analyze the data that was send after the connection was established.

They used Wireshark to analyze the traffic and found out that update.exe sends data to genuine.microsoft.com. Some of the data seems to be encrypted while some could be identified. It sends registry information, namely the SusClientID as well as information about the version of the WGA tool, the windows version and the language of the operating system. It also sets a cookie which contains a GUID which could possibly be used to identify the computer.

I recently received an email from one of my readers who asked if there would be a secure way to update a Windows XP installation that already had service pack 2 installed with the latest patches issues by Microsoft in the months after the second service pack was released. His main concerns were about WGA, Windows Genuine Advantage. He did not like the fact that data was sent from his computer to Microsoft.