Annoying Windows 11 Dev Channel features we hope will get dropped

The Microsoft Dev Channel, otherwise known as the Windows Insider Program is a place for the software giant to test out and tweak new features that could be coming to its flagship operating system, Windows 11. Microsoft has long had a troubled history with Windows updates, however, which is why it is always a good idea to keep an eye on the new features that could be on the horizon, which is exactly what we’re doing today, highlighting the top 3 features we’ve seen in the Dev Channel that we hope don’t make it into a future Windows update. 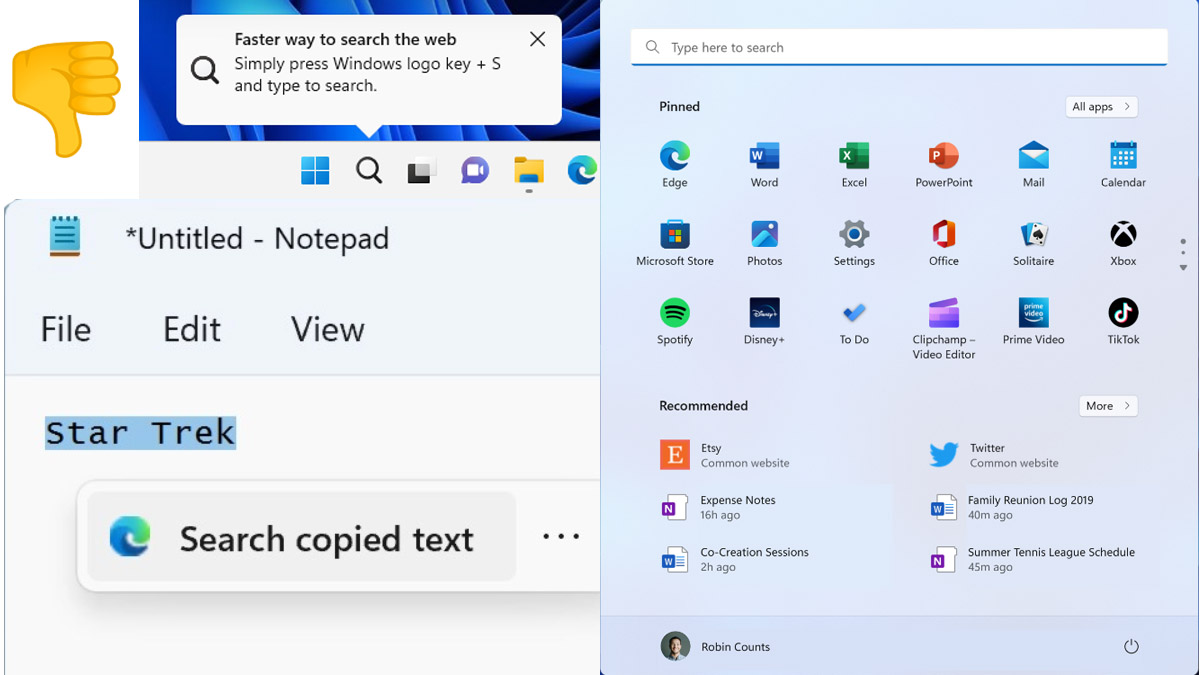 It is a well-worn internet meme that the Edge browser only serves a single purpose, which is to install Chrome. Whereas this may or may not be true for many users, the fact remains, as we recently mentioned, that Edge only takes up a tiny proportion of the web browser market share compared to Google Chrome, which has 15 X more users than Edge. We can understand then why Microsoft may be trying to push Edge on Windows users, but it doesn’t make it any less annoying, frustrating, and overall anti-user friendly.

Unfortunately, however, as has been spotted in Windows Insider Preview Build 25247, a new suggested action feature looks set to push Microsoft Edge every time you copy some text by asking you if you want to search for the phrase online using Edge and Bing. To be fair, searching for a copied phrase is a useful feature, but limiting it to a certain web browser is incredibly frustrating. Fortunately, however, there is hope as a noted Windows 11 insider has spotted some other code that includes the option of searching on other browsers too. If, however, the monopolized feature does make it to release, you can disable the suggested actions feature in Windows 11 altogether by going to Settings, hitting System, clicking the Clipboard tab, and then toggling the Suggested actions feature to off.

This is another one that has come with Insider Build 25247 and just plain looks like a way for Microsoft to sneak in ads to one of the most used areas of Windows 11 under the guise of recommendations. What’s even worse is that Microsoft hasn’t included a user-friendly way of disabling the feature in the Dev Build either. This means if you are a Windows Insider you will need access to the Vivetool app and to follow this in-depth guide that has been put together by Neowin, thanks to help from the same Windows Insider mentioned earlier. Again, however, if that sounds too complicated and you definitely don’t want to see this feature in a future update, we’ll include instructions at the end of the article on what you can do about it.

As you’ve probably noticed, most of the issues currently on the table in the Windows Insider Dev build are related to ads, whether they be for Microsoft products, or third-party ads the software giant is monetizing. Well incredibly, the level of inception goes one layer deeper here as banners have been spotted in Windows Insider Preview Build 25236 that prompt users to to take advantage of Windows search. Microsoft is saying it is doing this as a way to offer users tips, but really it simply ads up to a small ad for a Windows tool that itself is filled with ads. Yes, it is basically an ad for ad. Well done, Microsoft, you have really outdone yourself with this one.

What can you do about these annoying features?

The Dev Build is there for Microsoft to test features for bugs, etc. but it is also there to solicit feedback from users on the new features it is implementing. This means that should you agree with us that these highlighted features are annoying and you don’t want to see them in future Windows 11 updates, you can head to the Microsoft Feedback Hub and tell Microsoft exactly how you feel. Obviously, we have highlighted these features, but the Feedback Hub is also there for anybody’s opinions on Windows or Windows features.

Previous Post: « How to unlock Education Themes on Windows 11 version 22H2
Next Post: « Windows 11: Two feature drops in the first half of 2023