Mozilla released a new version of its Firefox web browser today. Firefox 106.0.4 addresses three non-security related issues in the browser, including a crash fix during media playback that affected some users of the browser. 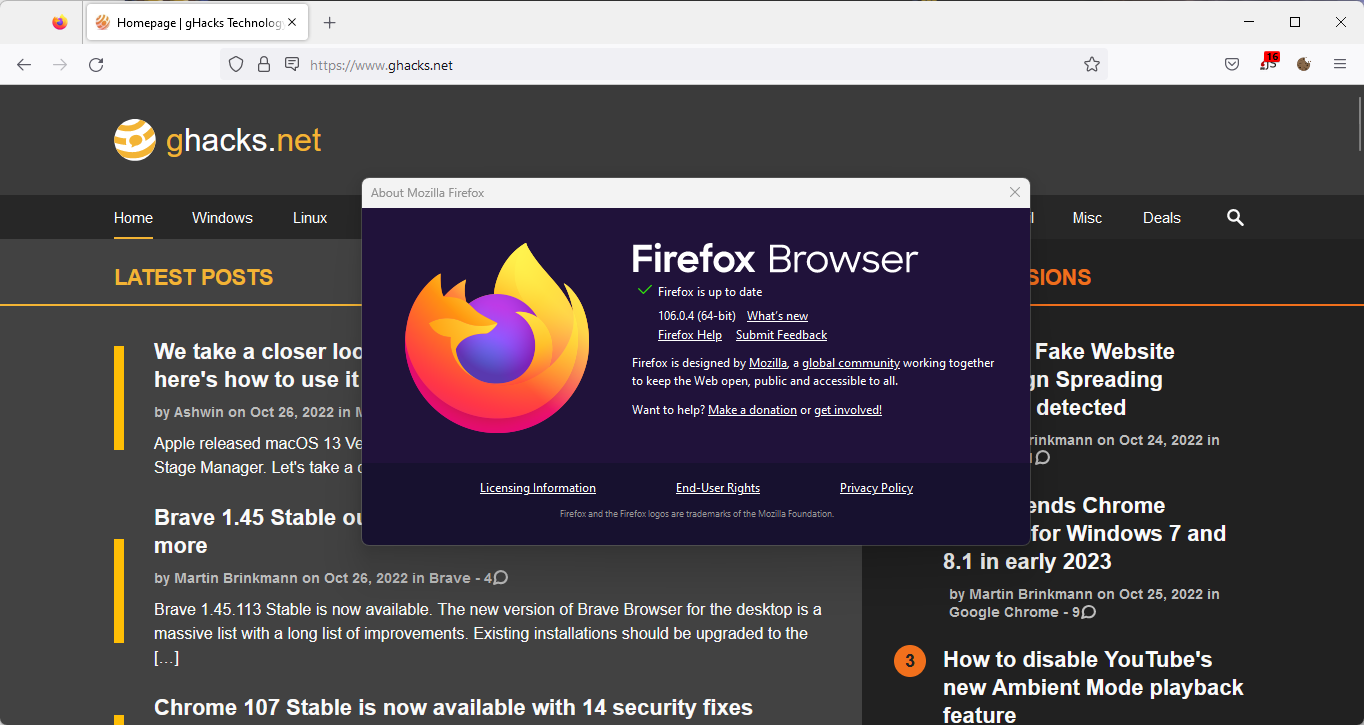 The new stable version of Firefox is available already. Most Firefox installations will get updated automatically, but users may speed up the installation by checking for updates manually. Users affected by one of the affected issues may want to update early to resolve those.

To run a manual check for updates, select Menu > Help > About Firefox. A popup window opens that displays the current version. A check for updates is run and any update that Firefox finds during the scan is downloaded and installed.

Firefox 106.0.4 addresses three non-security issues in the web browser. Two of the three issues affect media playback in Firefox. One addresses a DRM video playback issue that can lead to a crash, the other a crash that could happen during media playback.

The first issue appears to be a regression. Mozilla explains that playback of DRM videos in Firefox could "in unusual circumstances" lead to a crash; this can happen in low-memory situations and other scenarios, according to Mozilla.

The second issue may cause Firefox to crash or freeze; this happens when the browser's GPU process crashes or during a device reset.

The third and final issue addresses an issue with input elements. These stopped working after changing the type from date to datetime-local.

Interested users may check the official release notes, but they do not provide additional information on these issues.

Firefox users who did not notice any of the issues should feel no hurry to update the browser immediately.

Firefox 107, the next major stable version of the browser, is scheduled for a release on November 15, 2022.

Now You: which version of Firefox do you run, if any?

TranslateLocally: local translations as an Extension and Desktop app

Previous Post: « Mozilla may extend Firefox on Windows 7 and 8.1 support
Next Post: « Firefox 106.0.5 fixes a crash on certain Intel systems