The popular add-on SearchPreview is being discontinued this month. But it already has a replacement called Search Result Previews. 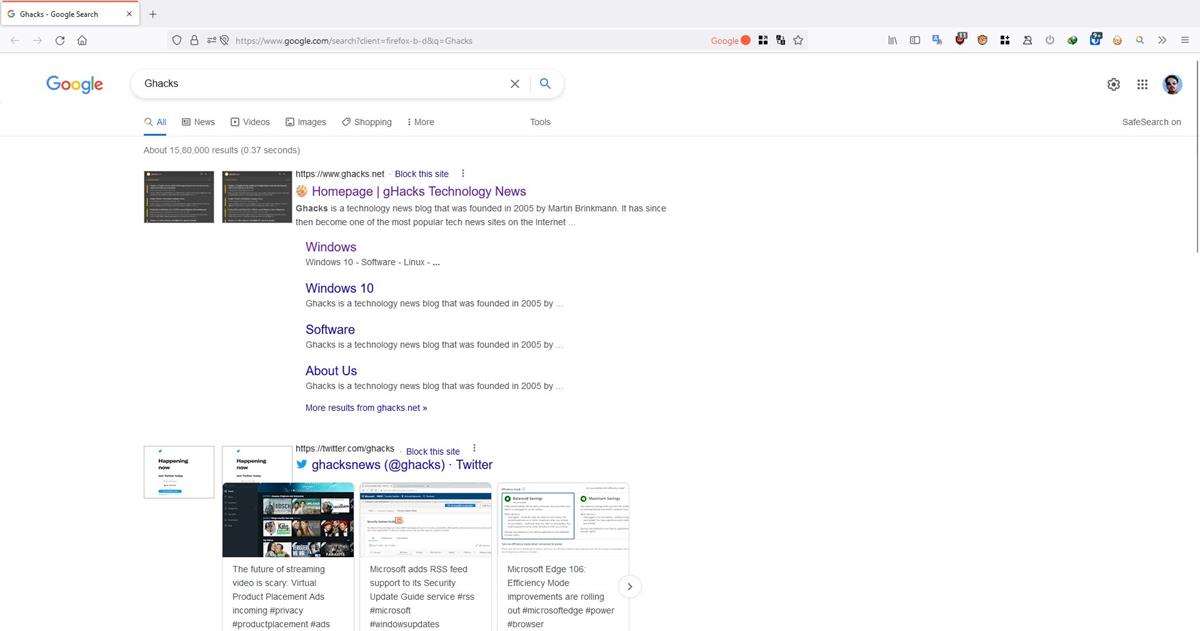 For those unaware, this is a nifty little plugin that displays a thumbnail preview of websites that appear in the search results of Google and DuckDuckGo. You would have seen web previews of pages when you share links via Twitter, Facebook, WhatsApp, Telegram. SearchPreview (formerly GooglePreview) provides a similar thumbnail preview, but for pages in search results. 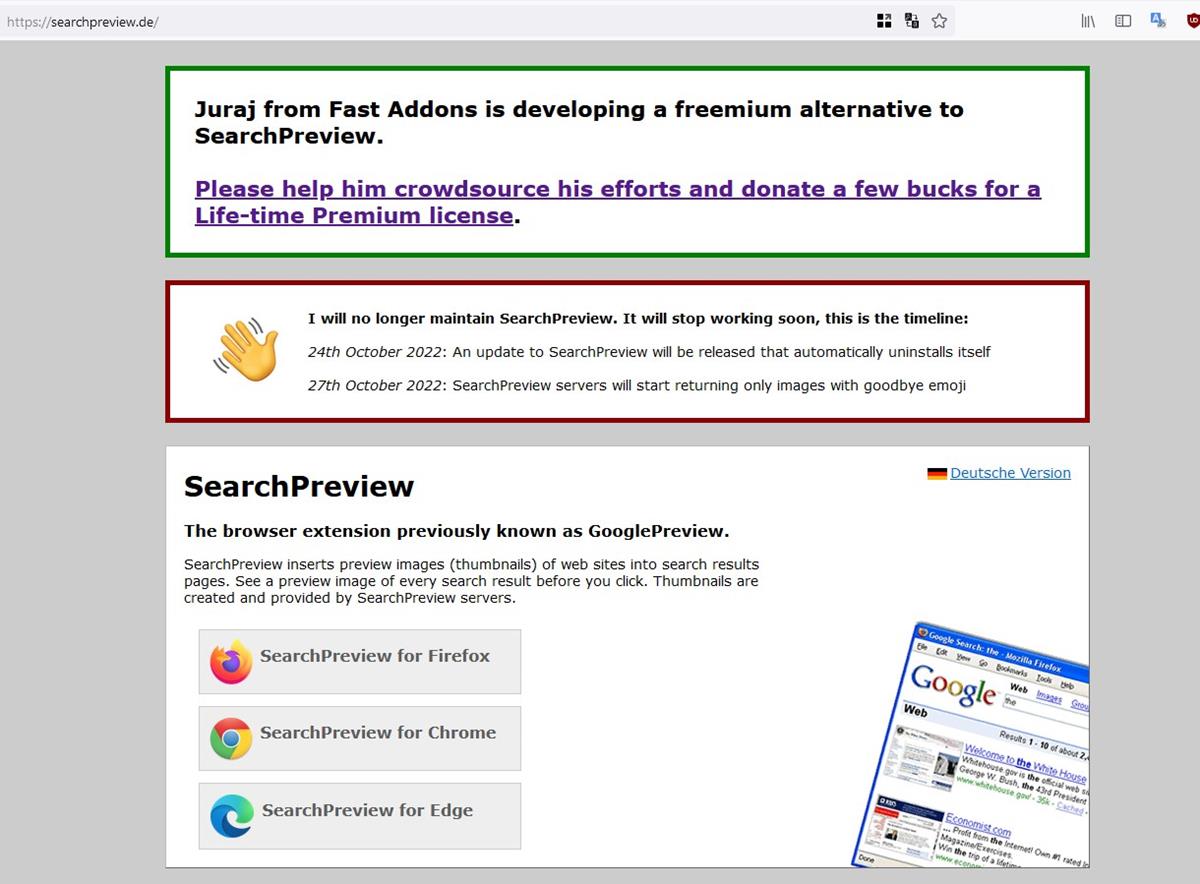 Edward Ackroyd, the author of the SearchPreview extension, has announced that he will release an update for his extension on 24th October. The update will make the add-on automatically uninstall itself. I can't say that I've ever seen an add-on do that before, that should be interesting. The servers for the service will start displaying the goodbye emoji (waving hand instead of thumbnail previews), from October 27th. The add-on will live on in a new form, Search Result Previews.

Juraj Mäsiar, the creator of Group Speed Dial and ScrollAnywhere, requested support from users on Reddit to develop an alternative for the soon-to-be-discontinued SearchPreview. He contacted Ackroyd to help him with the task, to which the latter agreed and sent him the source code for the add-on making it an official replacement. He also Mäsiar him to use the current servers for versions 1.X, after which it will be migrated to a different server.

In addition to Google and DuckDuckGo, the new add-on will also display page previews on Yahoo, Bing and other search engines. The most important change is that Search Result Previews will be a freemium extension.

Why is Search Result Previews a freemium add-on?

Search Result Previews has to scrape millions of web pages and store their thumbnail preview images on its servers. This could be to be an expensive project for the developer. That's why the add-on's new developer has a crowdfunding campaign to seek support from people.  The campaign's page mentions that supporters will be able to get a special "Early adapter - Life-time Premium version". So far, it is not clear what features it will offer. The extension will follow a yearly subscription model for the Premium version, to cover the costs for the servers.

Mäsiar's website, Fast Addons, has a roadmap that lists the plans for Search Result Previews.  While the Firefox add-on is already available for download on Mozilla's AMO, the Chrome extension is under review, and could be available any day. Here's where things get interesting, the developer plans to work on a version for Safari (Mac), iOS, and Firefox for Android. 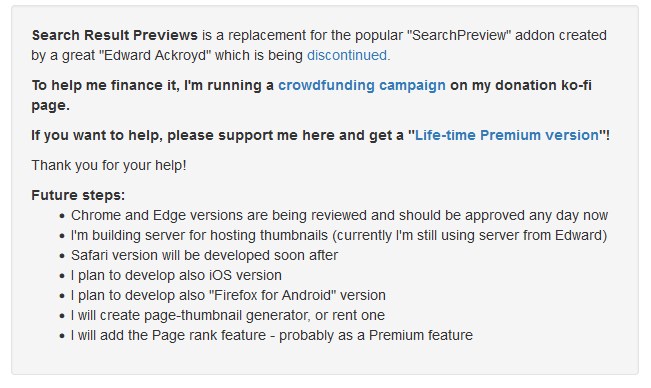 His other add-on, Group Speed Dial, generates local thumbnails by visiting the web page in the browser.  Search Result Previews on the other hand relies on fetching page previews from the cloud. Mäsiar says that he may create a page-thumbnail generator for this, or rent a third-party service to make it possible. The developer also wants to add a Page rank feature that will be exclusive to the Premium tier.

The extension works fine, no complaints there. Mäsiar has been recognized by Mozilla as a friend of add-ons. As a long-time user of Group Speed Dial, I'm not worried about the new add-on's privacy policy, but I should point out that an actual statement regarding the add-on's privacy is missing in the listing at the AMO. That said, I found this on the donation page, which sort of clears the air.

I think that the description of Search Result Previews needs to mention that it will follow a freemium model in the future, I only discovered that bit after I visited the author's website and the crowdfunding page. The original add-on's description does not mention the existence of its replacement either, so I'm not sure how existing users would be notified about it, especially considering how it will be uninstalled automatically. Perhaps the add-on would open a tab when it gets removed ? A link that points to the replacement might be helpful to educate users about switching over to Search Result Previews.

Personally, I would have preferred to see the original add-on go the open source route, and its replacement to rely on donations to support additional features instead of a subscription model. But I suppose a one-time fee may not be a viable solution to maintain a cloud-based service. These are just my personal opinions about the add-on, and are not intended to criticize the effort of the developer.

As long as the free version continues to support existing features, which according to the developer it will, and the Premium tier is completely optional, this shouldn't be a problem for most users.

Share your thoughts about Search Result Previews with us.