Microsoft has announced the availability of Windows 11 Build 22621.675 in the Release Preview Channel of the Insider Program. It enables the much awaited File Explorer Tabs experience for all users, along with a handful of other features. Microsoft debuted File Explorer Tabs in the Insider Preview Program's Dev Channel when it released Build 25136 in June this year. The browser-like navigation experience for the built-in file manager, began rolling out to some users in the Release Preview Channel last week. The latest update from the Redmond company enables File Explorer Tabs for all users in the channel, which means it is almost ready for general availability.

Can't wait for it? You can enable File Explorer Tabs in Windows 11 22H2 now by reading our guide. 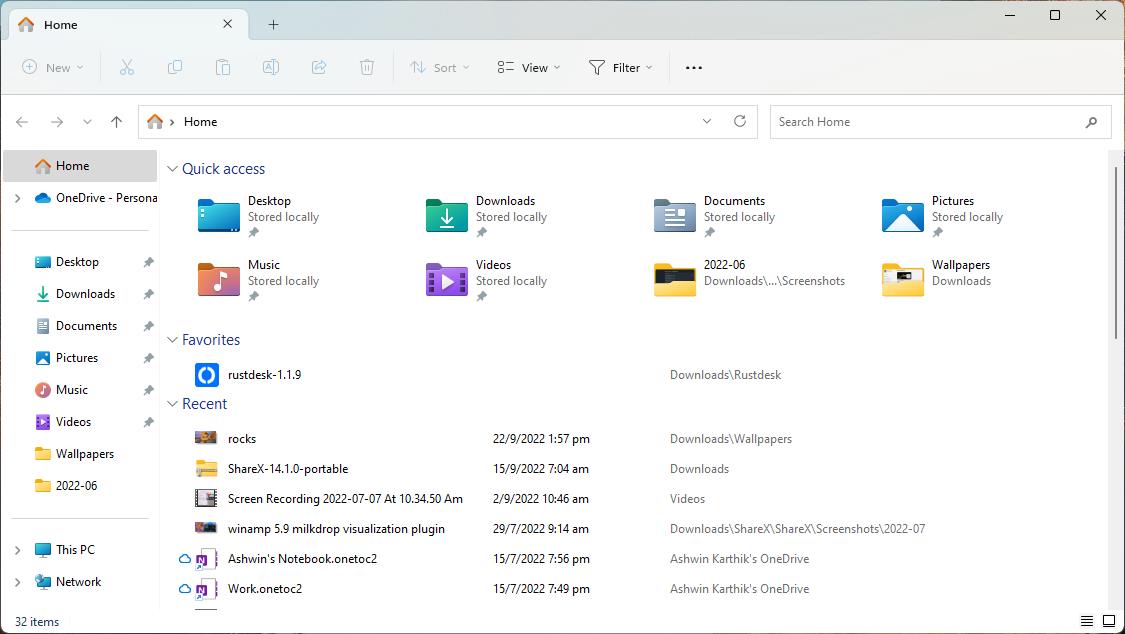 Build 22621.675 also ships with another feature for File Explorer, it has a new section that acts as its homepage. The start screen, which was first seen in Build 22593, allows you to pin your favorite files and folders, and lists recently accessed files, It also lets you view your recent files stored in your OneDrive, and includes them in the search results.

Windows 11 Build 22621.675 Release Preview includes Suggested Actions. The clipboard enhancement feature allows you to interact with items that you copy, such as phone numbers. It displays a small pop-up menu with shortcuts that you can click to make a call with Teams or Skype (with the selected number). Similarly, copying a number that represents a future date, will allow you to create an event in the Calendar app.

The Taskbar Overflow menu, which was introduced in Build 25163, is also available for users in the Release Preview Channel. When your taskbar runs out of space for icons, a three-dot button will appear near the system tray. Clicking on the button opens a menu called the Taskbar Overflow menu, to display a list of shortcuts for other windows that are open.

Windows 11 Build 22621.675 adds support for Nearby Sharing (also introduced in Build 25163), which allows you to share files with more devices easily using Bluetooth and Private Networks.

On a side note, Windows 11 Insider Preview Build 22621.741 and 22623.741 are available for users in the Beta Channel. The first build include fixes for the Tablet-optimized taskbar. Microsoft has fixed some localization issues in both builds, and a bug that was impacting the Server Manager.

When it announced the release of Windows 11 22H2, Microsoft had confirmed that it would introduce an additional set of experiences in October. Today, the company confirmed that File Explorer Tabs, Suggested Actions, and the Taskbar Overflow menu are some of the experiences that will be included in the update. So we can treat Build 22621.675 Release Preview as a sneak peek of the first Windows 11 Moment update.

Have you tried File Explorer Tabs, do you like the feature?

Previous Post: « Windows Hello sign-in may not work after upgrade to Windows 11 version 22h2
Next Post: « Microsoft is adding support for iCloud Photos in Windows 11's Photos app; Apple TV and Apple Music apps are coming to PCs next year