Windows 11 Insider Preview Build 25193 is now available for users in the Dev Channel. Microsoft has added another subscription management section to the Settings app. 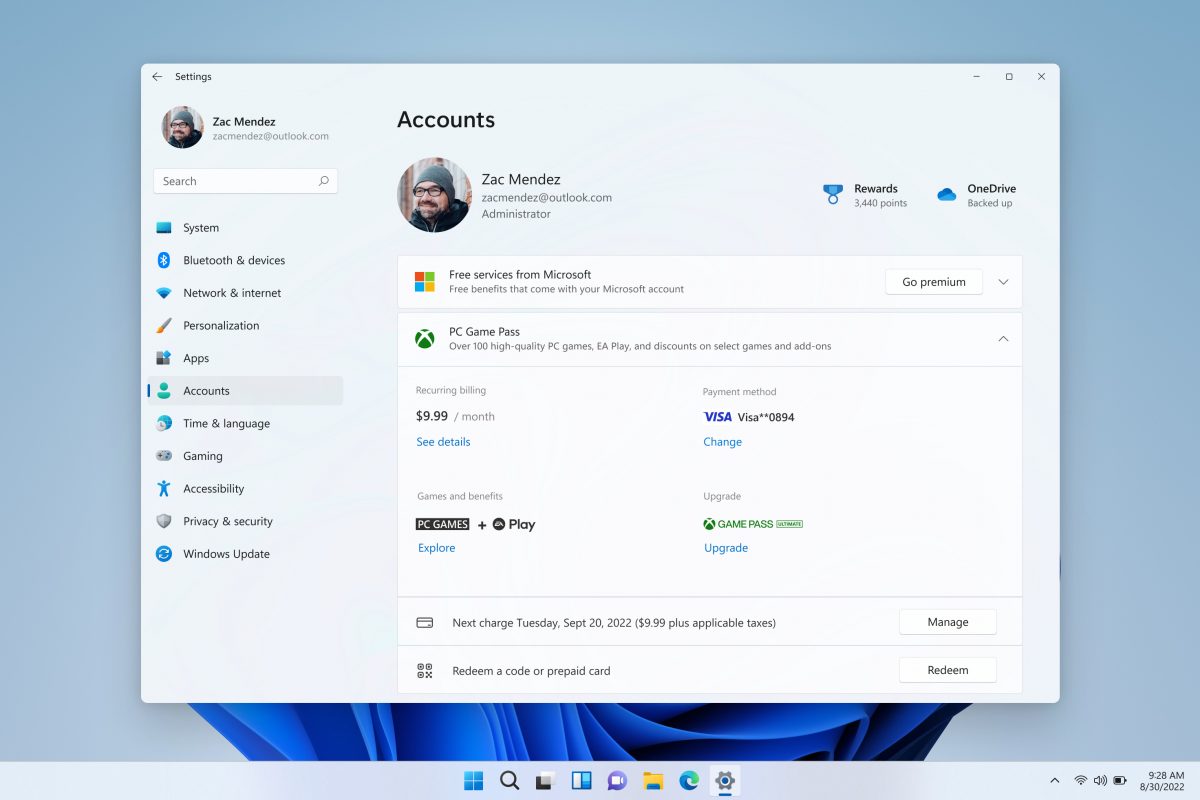 Over the past few months, Microsoft has added several ways to manage services that you're subscribed to from the Settings app, including OneDrive and Office apps. Now it has introduced an Xbox subscription management section that can be accessed from the Settings > Accounts page in Build 25193. It allows users to view the status of their Xbox Game Pass subscription, i.e. the current price of the plan that they are subscribed to, their chosen payment method, and the date on which their credit card will be charged for renewal. The page also has an option to redeem a gift code or a prepaid card. Users who have subscribed to the basic plan can choose to upgrade to the Ultimate version from the Settings page.

The feature may not be available for all users, as the Redmond company is A/B testing it.

Microsoft has added support for new Braille displays, input and output languages in Narrator. This includes the APH Chameleon, the APH Mantis Q40, the NLS eReader and other devices. The company is advising users who already have the Narrator’s braille support feature installed, to uninstall it from the Settings > Apps > Optional features > Installed features > Accessibility – Braille support page.

To install the new Narrator braille support, go to the Settings > Accessibility > Narrator > Braille section, and select the more button. Next, select the Download and install braille button. You will need to restart the computer and access the same section again. Users who have a third-party screen reader installed can select the braille display driver that they want to use from the “Braille display driver” option.

Microsoft has fixed an issue that was preventing .NET Framework 3.5 from working in the previous flight. The Taskbar overflow will use the same accent color as your Taskbar. Some Explorer.exe crashes specific to the Taskbar overflow have been patched. The update patches an isse that was causing the Taskbar icons to drifting around, it was related to the widgets app.

The Taskbar overflow will not appear before it is invoked or overlap with the date and time on the secondary monitor, in multi-display environments with monitors that had different DPI. Modyifing the display scaling settings will no longer cause the taskbar overflow flyout to appear as if it was floating away from the taskbar. The Taskbar will now auto-hide and appear properly when the File Explorer window is maximized. The file manager now uses the correct color (of the current theme) for the search box's background. Shortcuts for files can be unpinned from the Favorites section of the Home page.

The Start Menu should no longer crash if you have Search Highlights enabled. Users were experiencing a crash when Uninstalling apps from the Apps > Installed apps, Microsoft says that this issue has been patched. A bug that was leading the Storage page in Settings and Disk Cleanup to crash has been resolved. URIs in the Settings > Accounts section should now navigate to the correct page. The icons under Privacy & Security > Voice activation were not rendered properly, the latest update solves this issue.

Microsoft has added 5 new bugs to the list of known issues in the Dev Channel builds. Moving the mouse in certain games could cause a bugcheck. The OneDrive app is reportedly running the set-up process every time the computer is rebooted.

Some users who have enabled the “launch folder windows in a separate process” have reported that they were unable to access File Explorer since updating to the previous build. The command bar options in the file manager such as copy, paste, and empty recycle bin may be missing even if they are enabled in the Options.

The Widgets icon on the taskbar may not display the weather correctly, it might be missing text and the icon is not aligned properly and appears to be raised. I had the missing text issue, but was able to fix it by switching to a different theme and back.

You can find the full release notes for Build 25193 at the Windows Insider blog. Users in the Windows 11 Beta Channel can update to Build 22621.590 and Build 22622.590. The new builds contain numerous fixes for bugs related to Microsoft OneDrive, Robocopy, File Explorer, and the Taskbar.