WhatsApp Messenger now allows users to delete messages even after 2 days. The VOIP service announced the news via its social media channels.

Prior to this update, WhatsApp had a pretty strict time limit for deleting messages. You could only do so under 1 hour, 8 minutes and 16 seconds. That's a weird limit, isn't it?

So, compared to the previous limit, a 2-day window to delete messages seems like a nice upgrade. But, here's the thing. While the tweet from the company mentions that users have a little over 2 days to delete your messages, it doesn't specify the exact time limit. Is it 48-hours since the message was posted? According to TechCrunch, the limit is actually 2 days and 12 hours, i.e. 60 hours.

The only catch is that when you delete a message in a WhatsApp chat, it still leaves behind a "You deleted this message" remnant. That might look a little awkward, especially when done in a group conversation. This is another area where WhatsApp still has to catch up with its biggest rival, Telegram, as it doesn't leave a mark behind after a deleted message. As a matter of fact, Telegram doesn't have a time limit for deleting messages. It even lets you delete messages sent by others.

It's strange that there is still no option to edit messages in WhatsApp, that feature could come in handy for editing typos, adding additional information, URLs, images, captions, etc. 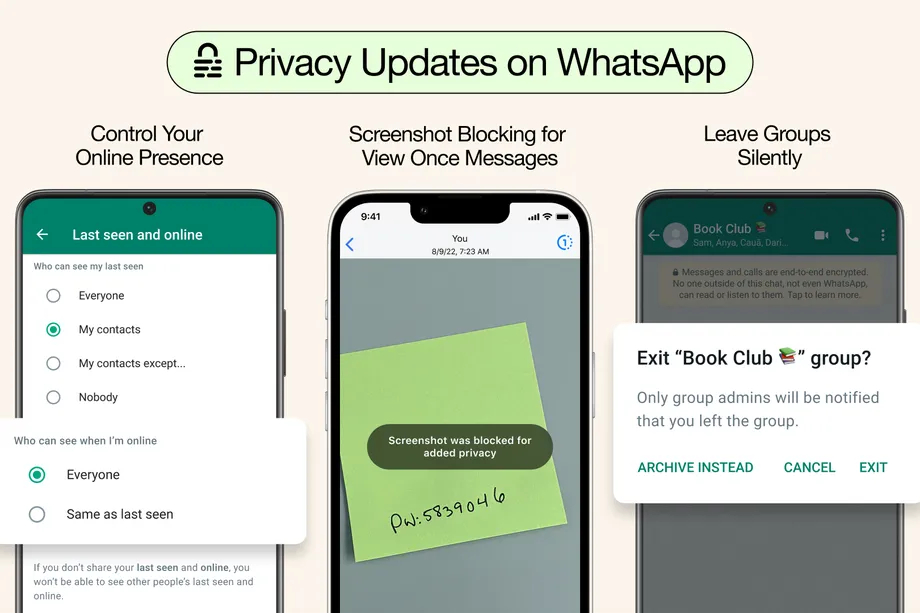 WhatsApp will soon start allowing users to choose which of their contacts can view their last seen status, while hiding the information from other users. This can add another layer of privacy.

Have you ever been a part of a group, but eventually stopped chatting there? The thing is, when you try to exit the group, WhatsApp marks it with a status that reads "User left the group." That can be annoying, as it may get you some unwanted attention, and you could receive some messages inquiring why you left the group. That's the last thing you may have wanted.

The Meta-owned messaging service has a way to fix this, it will soon allow users to leave groups silently. The upcoming feature will only notify admins of the group, so other members in the group won't see a message when you exit the conversation quietly.

You may be aware that WhatsApp supports view once messages, which includes media content. People could still save a copy of such messages by taking a screenshot on their mobile phone. This posed a privacy issue for users.

Screenshot blocking is another privacy-related feature that is coming to WhatsApp Messenger. It will prevent users from saving self-destructing messages, i.e. view once messages. Telegram has a similar feature, called Content Protection, which prevents users from copying, saving or forwarding messages. But this restriction is only available for Telegram Channels.

The improvements for last seen status, screenshot blocking, and exiting groups privately will soon be available for users, on mobile and desktop.

What do you think about these new WhatsApp features?

InAppBrowser reveals if TikTok, Instagram and other apps with browsers inject their JavaScript

Previous Post: « Nova Launcher and Sesame Search have been acquired by Branch, an analytics company
Next Post: « Twilio, the company that owns Authy, suffered a data breach