The Microsoft Edge Dev Channel version has been updated to version 105.0.1300.0. It doesn't introduce any major features, but ships with a couple of interesting changes, and various fixes.

The PDF toolbar in the Microsoft Edge's Dev build has a new option, that allows you to share PDFs quickly without leaving the tab. Just open a PDF file, and you might see the button in the browser. 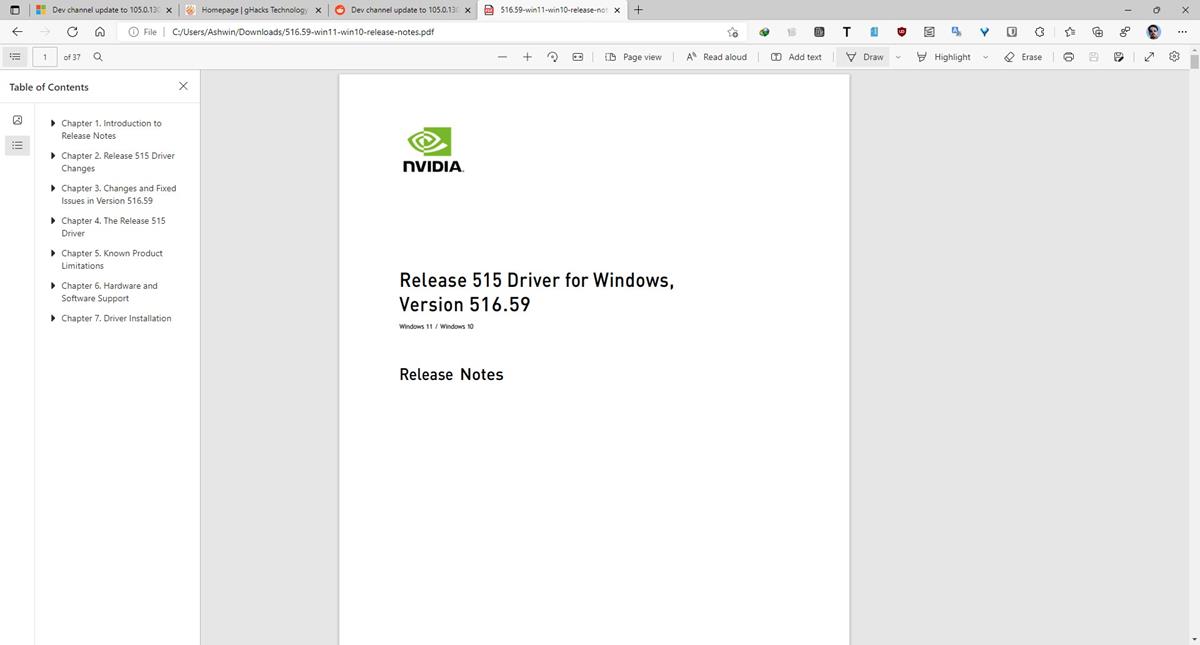 I don't have the PDF Share button in my up-to-date version of Edge Dev, since it is being A/B tested. Maybe you will have better luck than me. As of now, there is no flag that users can enable to access the new feature.

The release notes for the version mentions that new policies have been added for improving trending searches displayed in the browser. The Efficiency Mode's strings and feature settings have been improved, but it doesn't go into the details about what's been patched. The policy for the Sleeping Tabs will now clearly indicate whether it is on or off. That's a little odd, since the old version wasn't exactly confusing in the first place. Screen Readers have better announcements for the Options available in the Print dialog.

Users on the mobile version of Microsoft Edge Dev should no longer see an animation error in the sync settings page. The search box that appears at the top of the top sites in the app is now usable. The app's keyboard UX has been improved. Microsoft has stated that it has removed the mask of articles after Read Aloud has been started. The mobile browser will use assorted color schemes for highlights when different themes are used.

One user noted that PDF scrolling appears to be slow in Microsoft Edge Dev, but not in the other channels, i.e. Beta and Stable builds. Microsoft is currently investigating the issue.

Out of curiosity, I tested whether the issue exists by opening some large PDFs (250MB+), and the performance seemed to be the same for me across all the channels. I'm not saying that it is good, the scrolling issue is real. It's pretty slow compared to the PDF reader in Firefox. Edge's built-in document viewer seems to render the parts of the page as I scroll down or up, which is what I believe makes it appear slow while scrolling.

The Microsoft Edge channels won't be receiving any major updates over the coming weeks because of holidays in the US. The schedule will resume in the week of July 18th. The Canary channel is expected to be receive its scheduled update this week.

Microsoft has been toying with Collections in Edge, and its upcoming upgrades will allow users to save videos, images, as you browse. It will display an "Inspiration feed", which is basically a set of recommended articles based on content that you have saved in your Collections. Visual Search will help users find similar images when they mouse over a picture.

Do you have the PDF share button in Microsoft Edge?