Another look at the open source bootable USB tool Ventoy

We looked at the open source bootable USB tool Ventoy back in April 2020 when it first came out. The developer has been very active in the meantime; reason enough to take another look at the application to find out what has changed and improved.

Ventoy creates bootable USB devices using ISO images. That sounds an awful lot like what established programs such as Rufus do at first, but when you realize that it puts the ISO images on the drive and does not extract them, it becomes interesting.

Even better, it is possible to place multiple ISO images on the USB device after it has been prepared by Ventoy; this allows you to boot into different Linux systems or install different versions of Windows straight from a single USB device.

My initial review looked at Ventoy 1.0.06. The latest version, released just two days ago, is Ventoy 1.0.12. The interface has not changed all that much, but functionality has improved significantly. 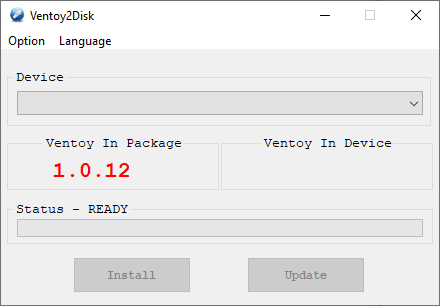 One of the biggest changes was introduced just days after my initial release. Ventoy 1.0.07 introduced support for Secure Boot. Other changes include support for changing the filesystem of the first partition (ntfs/udf/xfs/ext2/ext3/ext4), persistence support for various Linux distributions such as Ubuntu or Linux Mint, and support for auto-installation.

Persistence support allows users to save changes made to a Live system. Ventoy supports persistence for select Linux distributions. The process is slightly complicated as it is necessary to edit a JSON file to define a persistence array. You can check out the documentation on the Ventoy website for instructions on how to do that.

The latest version of Ventoy introduced several new features and improvements. It adds support for booting wim files directly (legacy BIOS and UEFI). It allows you to boot directly from disk without any additional memory requirements. The system using the native Windows bootloader (legacy + UEFI), and it is possible to customize the configuration using the bcd file.

Ventoy is a powerful tool to create bootable USB devices. One of its main appeals is that you put ISO images directly on the device instead of having to extract them, another that it supports multiple ISO images. Support for secure boot, wim images, and unattended installations have improved it significantly.

Now You: Have you tried Ventoy recently? What is your experience with the tool?

Previous Post: « Set any window to stay on top, shrink the window, make it transparent or enable dark mode for any program with WindowTop
Next Post: MemInfo is a minimalistic task manager that sits in the system tray »