Intel updated its Graphics Driver for Windows this week; it is the first driver that is officially compatible with Microsoft's soon-to-be-released Windows 10 version 1909 that is expected to be released in November 2019. The version number of the DCH drivers are 26.20.100.7323, and downloads are provided on Intel's driver download site already.

What's new in this version? 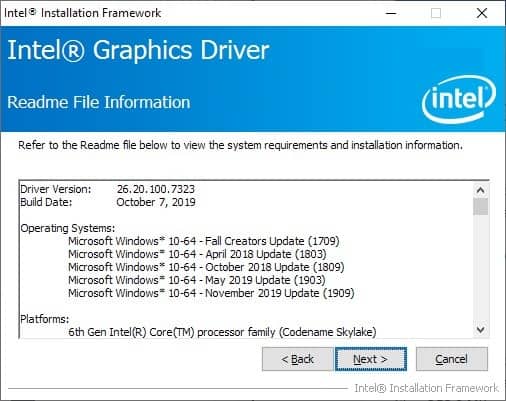 The drivers add support YUV420 on Display Port for the 10th generation processors with Iris Plus graphics. The drivers for Intel's 10th gen processors come with security improvements. The driver fixes a limited color range issue that occurred when the screen was duplicated on USB-C displays.

Intel says it has fixed issues related to crashes or freezes encountered in external monitor setups when resizing Ultra-HD Blu-Ray PowerDVD playback from full-screen mode to windowed mode, and detachable internal panels will no longer freeze the system when they are unplugged.

The drivers have been patched with fixes for graphical anomalies that users may have experienced in Arma 3 and Creo. The 3DMark Time Spy benchmark should no longer cause the screen to blink. The driver update also brings fixes for Intel Direct3D 11 extensions.

An issue which caused graphical anomalies in laptops when waking from sleep (by opening the lid) when connected to an external monitor via HDMI has been fixed.

Installation of the driver should resolve the fixed issues.

The new drivers may result in 3DMark benchmark tests not being completed on Windows 10 May 2019 Update (18362.329) which have the KB4515384 installed. You may experience minor graphics anomalies in NextPVR and Code Vein. The Surge 2 may crash or hang when Vulkan is used.

And though the drivers are certified for Windows 10 1909, they are in fact backwards compatible with older versions of the OS.

The drivers are available for the following platforms

If you are patient, you could wait for Microsoft to ship the drivers in a Windows Update. Or you can download them right now from Intel's portal and install them right away. The drivers are available as part of the Intel Graphics Driver package 1910.1007323.exe, and have a size of about 362MB.

You can verify the driver version installed from the Intel HD Graphics Control Panel > Information Center.

Head over to Intel's website for the download link, and for more information regarding the compatibility with your processor.

Windows 10 1909 is more of a service pack with bug fixes than a feature update, and hence will be released as a cumulative update. Don't forget to read Martin's article on what's new in Windows 1909.